DEQ has new plan to reduce mercury in river 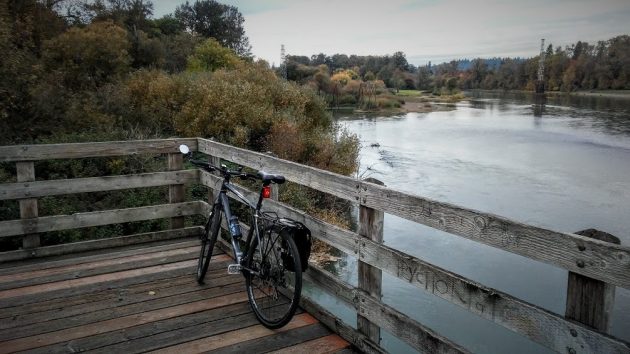 The Willamette at Albany on Oct. 15. The DEQ has issued a plan to reduce the tiny amount of mercury in the river water.

The DEQ announced on Monday it had issued its plan for reducing mercury pollution in the Willamette River. Whatever other merits this may have, it also gave me a pretext for using this photo of the river I took last month.

The DEQ calls the plan a TMDL, which stands for “total maximum daily load,” or the limit necessary to meet water quality standards.  This is a new version of the mercury TMDL that came out in 2006 and was never carried out. In 2011, the maximum standard for mercury in the water was lowered, and now, eight years later, we have the new plan.

(Mercury? As kids we used to play with the pure form of this metallic element. We called it quicksilver.)

The DEQ says the median concentration of mercury in the Willamette River Basin is 1.2 ng/L. That’s about 0.001 part per billion. The new standard is eight times smaller, or 0.14 ng/L. If the water had as little mercury in it as the new standard says, the DEQ figures fish caught in the river would be safe to eat. (Now you’re advised not to eat too many of them, according to the Oregon Health Authority.)

The funny part about the plan is that its goal — meeting the new standard — likely can’t ever be met. The DEQ acknowledges this. “The discharge limits based on meeting the water column criterion of 0.14 ng/L are not currently achievable,” it says in one of its publications.

Why not? Because almost all the mercury in the river comes from the atmosphere and from land erosion. Only 4 percent comes from industrial and municipal sources, according to the DEQ.

Still, the agency insists, something can be done. And it will make sure we do it. “The TMDL,” says the DEQ press release, “identifies the cities, counties, federal and state agencies, water discharge permittees and other responsible persons that must work together to reduce mercury in the Willamette River and its tributaries.”

“The goal of the revised TMDL,” the DEQ says, ” is to reduce mercury in the Willamette basin to levels that allow safe consumption of fish.”

Depending how much work and additional cost are involved in the coming mercury campaign, we might conclude that just not eating Willamettte River fish would be far less trouble and pretty easy to do. (hh)