Listening to the calming murmurs of Albany’s Talking Water Gardens on a sunny afternoon, you would not think there could be a problem. But there is, or at least the DEQ thinks it’s a problem.

The Oregon Department of Environmental Quality announced on Tuesday that it had fined Albany $5,400 because some of the treated wastewater circulating through the artificial wetlands has been leaking into the ground and getting into First Lake, eventually reaching the Willamette River.

The leaking under the northern berms of the Water Gardens has been going on since the city told the DEQ about it in 2013, the first year of the facility’s operation. Albany and Millersburg completed the joint project in 2012 at a cost of about $14 million, mainly to satisfy a DEQ requirement that treated wastewater be cooled.

The underground seepage is one of the reasons the city filed a lawsuit against CH2M-Hill, the engineering firm that designed the Water Gardens. The suit remains pending and is still in its preliminary stages. Only recently did an appeals court rule that the case can be heard in Linn County Circuit Court.

The DEQ notified the city’s law firm handling the suit and related matters, Cable Huston in Portland, of the fine on June 13 and allowed 20 days to contest the action. (Officially it’s not a fine but a civil penalty.) Albany did not appeal the DEQ action.

The DEQ’s complaint is that Albany is authorized to have only two discharge points of treated wastewater, and both are close together in the Willamette River at River Mile 118. The agency contends that the unintentional leaking from the Talking Water Gardens is an unauthorized point of discharge.

In addition to imposing the penalty, the DEQ gave Albany 90 days to submit for approval a plan to stop the leaks. In the meantime, the city is supposed to evaluate options for reducing the volume of the leakage.

If there was a simple way to slow or stop the leaks, Albany would have done so years ago.  One way is to drain the wetlands, dig up the ponds, install some kind of impervious liner, and start over with new plants. Or abandon the Talking Water Gardens altogether and shut the place down.

The irony is that after years of slow or no plant growth, the ponds finally look like they’re developing a more extensive cover, something that’s essential if the mission of cooling the water is to be accomplished.

Also, don’t forget that we’re talking about water that’s already been treated and is ready to be discharged to the river, going through the Gardens only to be cooled. So if some of this clean water leaks into the stagnant hole that is First Lake, what’s the harm? Are the turtles going to complain? (hh) 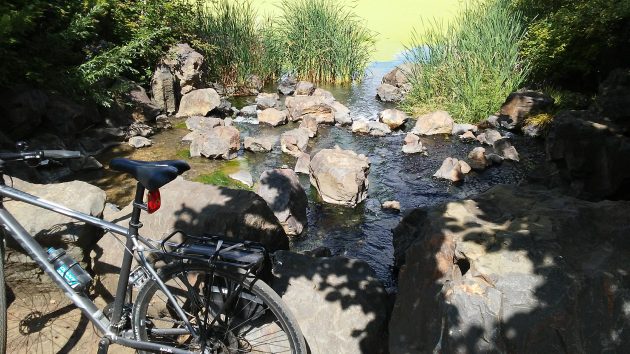 One of the waterfalls at Talking Water Gardens on Tuesday afternoon.