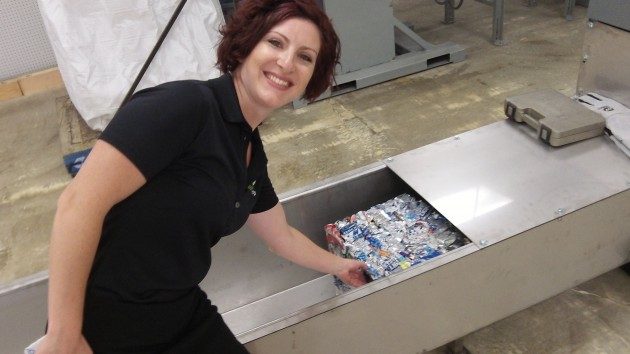 Cherilyn Bertges at the opening of the Albany Bottle Drop in August 2015.

Hoping to prevent longer waiting times, the operator of Oregon’s “Bottle Drop” redemption centers says it’s preparing for a higher volume of empties expected once the deposit on beverage containers doubles to 10 cents next April. But now I’m wondering if there is solid enough justification for the increase itself.

On July 22, I wrote about the coming increase and speculated that it would result in longer wait times at the Albany Bottle Drop on Santiam Highway. I editorialized that the place should be expanded, or perhaps a second one be opened, to handle the increase in volume.

“While we do expect volume to increase once the deposit goes up, we are also taking measures to handle that volume,” Cherilyn Bertges emailed on Friday. She handles public relations and outreach for the Oregon Beverage Recycling Cooperative, which operates the Albany Bottle Drop and, according to its web site,15 others around the state. “We continue to open more Bottle Drop centers and plan to have a 25 percent increase in the number of locations by the time the deposit increases. We have also left space in our Bottle Drop centers to add more self-serve machines if necessary. Additionally, we have recently added new features to make fundraising for nonprofits easier at Bottle Drop(s).”

She also told me that whether to add more machines will be decided once it’s known how much of an increase in the flood of empties actually comes about.

The cooperative has plans to set up redemption centers in Corvallis and Lebanon as well, but Bertges didn’t yet have the dates for those projects. Until they happen, Albany’s is the only Bottle Drop between Salem and Eugene. Retailers in places where there are no such redemption centers are required to keep redeeming empties themselves.

Under a 2011 state law, the deposit increase is required when the redemption rate of Bottle Bill containers falls below 80 percent for two years in a row. I had wondered how the Oregon Liquor Control Commission, which administers the Bottle Bill and announced the increase, knows the precise redemption percentages (68.45 percent in 2014 and 64.45 percent in 2016). Bertges was kind enough to explain: “The redemption rate in Oregon is calculated by comparing recorded sales data and return data. Since Oregon redeems bottles and cans individually versus by weight, the numbers that the OLCC uses to calculate the redemption rate are very accurate.”

Fine, but unless the disposal companies pick containers from the commingled recycling stream and hand them in for the deposit, the OLCC percentages don’t count all the cans and bottles that end up in recycling bins every week. The redemption rate is one thing. But the actual return rate is something else, and I bet it’s much higher than the percentages calculated by the OLCC. And if I’m right, there’s no justification for the deposit increase, which the 2017 legislature ought to review. (hh) 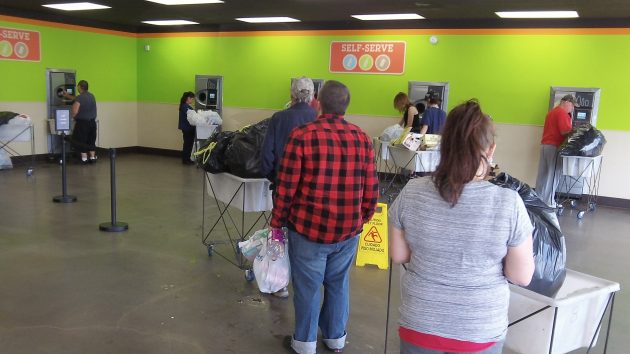 Waiting at the Albany Bottle Drop one day last week.


10 responses to “Deposits and redemption: Chapter 2”