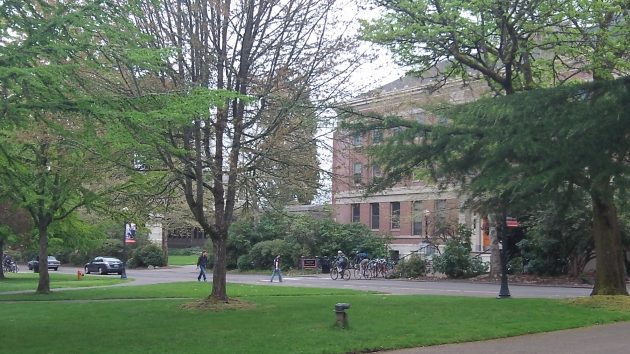 OSU is one of the schools wanting to shield undocumented students from deportation.

Oregon and Oregon State say they won’t cooperate with any federal attempts to track down and deport undocumented students. The presidents of the universities last week were responding to student concerns about what the Trump administration might do. The presidents and the students might worry less if they reread what Donald Trump, on the subject of illegal immigration, has actually said.

What he said, on his campaign website and in a long speech in Phoenix, Ariz., on Aug. 31, is open to different interpretations if you look at individual pieces or phrases. But the overall thrust is that Trump wants to proceed first and mainly against “criminal aliens.” He’s talking about people who have been convicted of crimes and who have somehow been released or otherwise allowed to stay in this country.

Trump says he intends to cancel President Obama’s 2012 order on “Deferred Action for Childhood Arrivals,” which created at least a temporary legal status for children brought to this country as toddlers. There was no authority in law for such an order, so Trump is right to want to rescind it. But that doesn’t mean he wants to deport people for whom America is the only country they have ever known.

Trump says he wants first to secure the southern border and get rid of criminals who are in the country illegally. When that is accomplished, he says, all immigration laws will be enforced, but in the enforcement there will be priorities. Enforcing the law makes sense. Why else have a law? But nothing he has said suggests that it will be a priority to move against, for example, young people on college campuses.

The universities want to shield undocumented students. From what, exactly? Do they think border patrol agents will invade their offices and demand the names of the handful of undocumented students granted residency status by the 2013 Oregon legislature so they can attend for in-state instead of nonresident tuition? As unlikely as that is, the schools would be right to refuse. You don’t rat out people who haven’t done anything wrong.

Trump’s rhetoric may be open to varying interpretations. But if he sticks with his principle goals and achieves them — securing the border and ridding the country of criminals who have no right to be here — he will have fulfilled his promise to voters. And then he and the Congress can figure out how to legalize people who were brought here as kids. (hh)


9 responses to “Deporting students? Not likely”