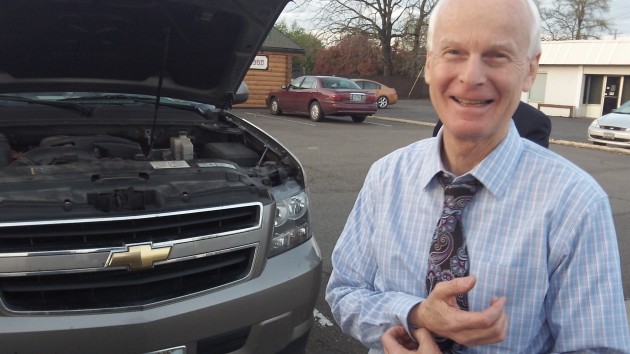 In Albany Wednesday, Rep. Dennis Richardson was delayed when his vehicle would not start.

Oregon has not elected a Republican governor since Vic Atiyeh won his second term in 1982. Dennis Richardson hopes to end the GOP drought this year. In Albany Wednesday night, he spoke and answered questions. And from what I heard, I’d say he has a shot.

As a state representative from Central Point, he’s served in the legislature since 2003. In his one term as co-chairman of the budget-writing Ways and Means Committee, he made sure the state had not just the required balanced budget but a reserve fund for schools for the second year of the biennium in case things went south, and without an increase in taxes. 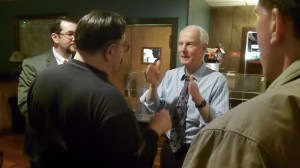 His monthly newsletters — not the usual collection of old news and self-promotion that many legislators issue — were packed with information. As an editorial writer I found them useful as guides through tax and budget issues. One problem has long been that state government wants to outgrow its revenues. When he had the chance as budget co-chair, Richardson proved that, as he said Wednesday, you have to be “strong enough not to fund everything.” That’s why the public employee unions will do everything to keep him out of the governor’s office.

One thing that should make a strong impression on voters interested in government that works: Richardson warned the governor in 2012 that the development of the Cover Oregon insurance exchange was failing. He says his first two letters to those in charge got no response. When he finally called John Kitzhaber and the governor called him back, Richardson says the response to his warnings was he should “trust the team.”

On the still-not-fully-functioning health insurance exchange and subjects such as energy policy and forest management, the dominant view during the nearly 20 years of the Kitzhaber-Kulongoski-Kitzhaber administration is that the policy makers and their consultants know best and the people should just put up with things like declining resource industries and higher prices for heat and light. “We need to replace this elitist attitude,” Richardson says.

He also pledges that he would be a governor who gets things done. Like what? How about a freeway cutting across the state from Ontario to Coos Bay? Making big use of the deep-water port could be a big step in lifting the South Coast counties out of their long depression.

Richardson knows that to win, he needs lots of votes in Multnomah, Clackamas and Washington counties. Strong support in rural Oregon alone won’t cut it. That’s why in June he and his wife plan to move to Multnomah County.

He probably hopes that from now on his campaign stops will not end in the kind of unscheduled delay that happened Wednesday. While he was talking to about 30 people at Pop’s Branding Iron — it was a meeting of the Linn County Republican Central Committee  — out in the parking lot the battery in his SUV seemed to have gone dead and he had to call Triple A. (hh)