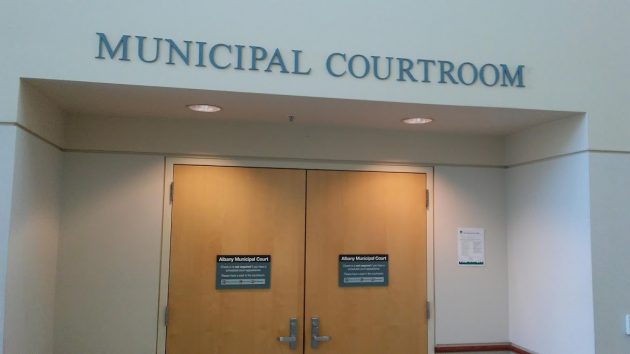 These are the doors people enter if they want to contest an Albany traffic ticket, and sometimes for other reasons too. They’ll appear before a new city judge starting next year.

He is Forrest Reid, who grew up in Albany and has practiced criminal defense law in Oregon’s state and federal courts for 30 years. The city council voted Monday night to make Reid a conditional offer to succeed Robert T. Scott, the municipal court judge since 2009, who is retiring and whose contract with the city runs through December.

In a long executive session closed to the public, the council also interviewed three other candidates, attorneys Arnold Poole, Heidi Sternhagen, and Bob McCann. Their agenda said councilors were scheduled to return to public session at 7:30. Actually, they did so just before 7, made their choice, and left.

It also deals with a smattering of other matters, such as violations of city ordinances, parking citations, and hearings when the police chief declares that a dog is dangerous and must be destroyed. (Remember the case of the dog named Blue? That was a long court battle that ended when Blue disappeared when someone, unidentified to this day, broke him out of the Albany Pet Hotel in October 2011.)

I wasn’t there for the executive session, so I don’t know what the council asked the applicants or what they answered. But in the past, it’s been important to the council for the court to pay its way.

In 2018, the municipal court reported $1,028,293 in total revenue. After paying the state and counties their share of fines, the city was left with $840,817. Total court expenses were $916,361. Judge Scott told the council in February that while the deficit was significant, it was nearly 60 percent smaller than the year before.

Forrest Reid’s father was longtime Albany attorney Roger Reid. Forrest, on his website, says his practice is devoted exclusively to criminal defense, and he has been the defender in more than 1,500 trials. He also says: “Unfortunately in today’s world, people who are charged with crimes often need alcohol or substance abuse treatment and/or mental and emotional counseling. I help guide my clients into appropriate evaluations before these are ordered by the court. By doing so early, I can often achieve a better result for your case and you will be on a path to a better future. We must work together as a team; striving to lessen the impact of these criminal charges and helping to get your life back on track.”

Most cases in city court are not that grave. But maybe now and then, Reid will get a chance to help someone “back on track” when they walk through those doors. (hh)

11 responses to “Defense lawyer picked to be city judge”