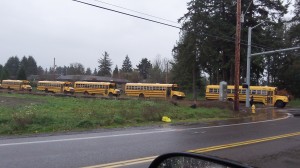 Are we going to quit busing school children? Probably not.

There was a story in the papers from Dallas, where a conference of the American Heart Association heard about research on the declining fitness among the world’s children. There’s reason to be skeptical of the findings, even though they sound plausible.
On average, the research reportedly showed, children running a mile now take 90 seconds longer than children 30 years ago. Among people aged 9 to 17,  heart-related fitness supposedly declined 5 percent every 10 years since 1975. How were these averages obtained? How many children run a mile, ever? The only chance to time young people doing so would seem to be in track meets. And it’s hard to believe that that has been done, reliably and worldwide, consistently over 30 or 40 years.
On the other hand, we don’t need research to tell us that because of the pervasive presence of technology, people everywhere, especially the young, become more sedentary all the time. If you are busy looking at game consoles or other kinds of screens, you don’t usually run, or play ball, or walk to the store or back and forth from school, or do any of the other activities children used to do one or two generations ago.
So what’s the solution? Games and other devices that work only when powered by treadmills? That’s about as likely as, in this country, abolishing school buses so children would have to walk a couple of miles in the rain and the snow. (hh)