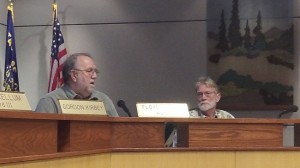 After lying low for about a year, Albany’s downtown urban renewal district will soon have to make a choice: Look for new projects and regain its momentum or return some of its money to other taxing districts. The advisory board of the Central Albany Revitalization Area started debating this Wednesday.

The issue comes up because the district will receive $2.3 million in property taxes next budget year and expects to have a surplus of $1.25 million. Urban renewal manager Kate Porsche says it could use the surplus to fund new projects, start assembling a reserve fund in case a big project comes along later, pay off a loan dating from 2007, or “underlevy” its property tax amount by all or part of the surplus. Underlevying means the money would go to other taxing districts that now lose some of their tax receipts to CARA, mostly the city, the Albany schools and Linn County.

City Councilors Rich Kellum and Floyd Collins seemed to prefer underlevying at least part of the surplus. Mayor Sharon Konopa worried that this would send the message that CARA was out of business, and Councilors Bill Coburn and Dick Olsen seemed to side with her a least in part.

A decision may come during the budget process this spring, starting with the next CARA meeting on May 7 at City Hall. (hh)

Tom Cordier responded on April 19: The CARA/ ARA decision to stop funding for a period of time was for the purpose of creating a decision matrix thru which every funding request would be evaluated. After 10 years of a mix of funding projects of every variety, Councilman Christman asked for that matrix to be developed. Perhaps I missed it, but I’ve not seen a published “decision tree” that will govern funding decisions. If that document has been adopted, I’d like to know what it says. For example do they plan to continue to fund projects that will be exempt from paying property taxes?
One thing is for certain: Never again will the council have the power to create another URD unless voters approve it first.