Death penalty: Repeal or affirm it 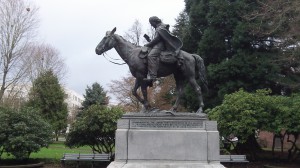 The “circuit rider” outside the Capitol. During his time, capital punishment was carried out in a timely way, but not any more.

On Feb. 26, the legislature’s House Judiciary Committee will hold a hearing on a bill that may not be popular but would restore a degree of believability to the court system where heinous crimes are concerned. The bill — House Joint Resolution 1 — calls for an election to repeal the death penalty.

You may recall that Oregon voters restored the death penalty for aggravated murder in 1984. There have been plenty of aggravated murders since. But only two men have been executed, both because they apparently wanted to die and therefore refused to go through all the appeals they could have pursued. For all the rest of those sentenced to death, the court system has found a way to prevent their executions. The law provides for automatic appeals of death sentences, and even in the event that the sentences are eventually upheld, the law allows for additional avenues of appeal on the state level. When those are exhausted, federal appeals can be pursued, all of them at public expense. The time for appeals never ends. Or at least, in Oregon, it has not ended yet for any of the 37 inmates on death row. In one case last year, Governor Kitzhaber has refused to carry out an execution even though the condemned man sued to get a death warrant and won. And that case is still hung up in the courts.

In short, Oregon courts and other officials have done all they can to prevent the death penalty from being applied, regardless of what the voters wanted in 1984. We have the law on the books, but it’s not being carried out. No one has been executed against his will, no matter how much he deserves to be executed — and some deserve it very much.

Under the circumstances, it would be good to get this issue before the voters again, as HJR 1 would do. If the voters decide to keep the death penalty, maybe the courts and the governor will get the hint. If they decide to scrap it, the court system can quit wasting time with all these appeals. (hh)