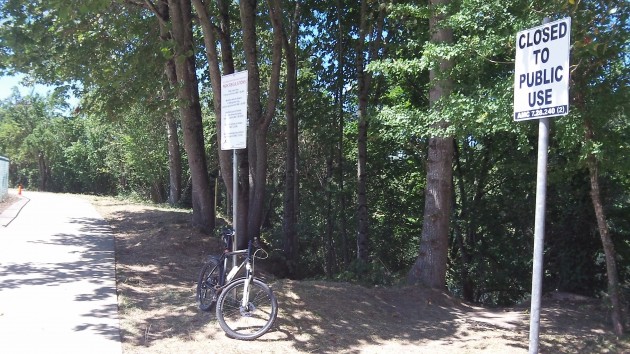 Signs along the Dave Clark Path. These are opposite the Willamette Community Garden.

As I expected on Monday, the body found on the Willamette riverfront off the Dave Cark Path that day has turned out to be that of a “local transient,” as the Democrat-Herald put it on its website Wednesday afternoon. Though the cause of death of this young woman was not yet known, it did not look like foul play. The case highlights in a dramatic way not just the plight of our homeless population but the atmosphere of the riverfront path as well.

The densely wooded riverbank and the path itself have become habitat for some of our fellow citizens who either prefer to hang out there or do so because they have no other place. The city has tried to control and prevent loitering. Signs have gone up where narrow trails lead from the path to the river: They explain the park rules and say: “Not open for public use,” Maybe not, but that doesn’t keep people from going down to the river and spending time there. And frankly, why should people not be allowed on public property on a navigable river?

The riverfront is a key in Albany’s dreams of turning the waterfront into a vibrant residential, entertainment and even business neighborhood. To promote business and attract visitors, the city government has helped a couple of breweries, one to expand and the other to get started. It has assisted several completed projects, including two office buildings still struggling to fill up with tenants. And just now the big Edgewater Village development is poised to take off.

These efforts will suffer if the riverfront continues to become a center for homeless life — and the occasional but inevitable death. People are hardly going to shell out a quarter-million dollars for Edgewater homes overlooking the path under those conditions.

What is to be done? Let’s hope for more use of this path by the general public, on foot and on bikes. Let’s encourage that by pruning some of the vegetation so that walkers have a better view of the river, especially in summer, and would-be campers have less cover. And let the police step up regular patrols. In the Gator vehicle they recently bought, they have an ideal tool for the job. (hh)