Deal proposed to save Cumberland Church 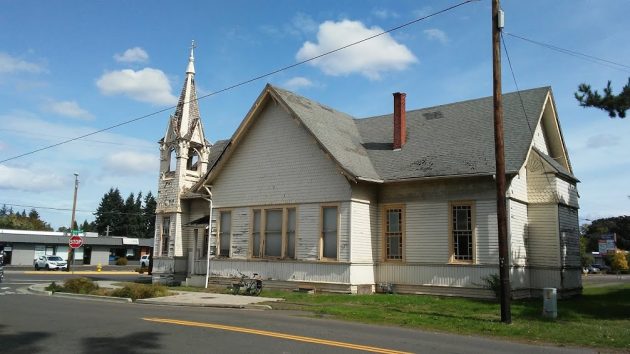 The 127-year-old building of the former Cumberland Presbyterian Church in Albany may be saved and moved after all — if conditions outlined by the city council Wednesday can be turned into an actual deal.

The council voted 5-1, with Bessie Johnson dissenting, to direct the city staff to negotiate a contract with the group of citizens trying to save the city-owned building. The group calls itself the Cumberland Community Event Center, because that’s what they’d like the building to become.

The contract would have the city give the building to the group by selling it for a dollar. And for a price yet to be negotiated, the city would sell the group the 1.6-acre site at Santiam Road and Pine Street, adjacent to the Albany Skatepark, where the structure would be moved.

The group would then be on its own, paying to move the building about 500 feet from its site at 401 Main, renovating it, and doing whatever is necessary to improve the site. The city then could sell the vacated former church site at Main and Santiam, which it bought for $150,000 in 2000 to accommodate a road reconstruction plan which later changed.

Teri Plagmann, an Albany lawyer, presented the group’s plans to the council. One key point was that it would cost the city nothing. A majority of council members have made it plain they want no city money spent on this effort. They also didn’t want the building moved to city-owned property, to avoid any future maintenance or operating expenses. Selling the site to the Cumberland group would meet that objection.

The group is working to become a tax-exempt nonprofit, which it expects to accomplish shortly. Its presentation to the council pledged that it would raise the money to complete the move and renovation of the building, which dates from 1892 and was enlarged in the 1920s. It would also have a business plan to operate and maintain the building and grounds as a self-sufficient event center.

The city bought the land at Santiam and Pine many years ago with donated money. City staff will check whether the gift placed any restrictions on selling the parcel.

What about timing? The Cumberland group’s plan shows the design being complete at the end of 2020, the move taking place early in 2021, and the renovation complete by early 2023.

It all depends on the proposed contract being agreed and then appoved by the council, and on the Cumberland group raising tons of money. So far they have about $40,000 in donated cash and pledges. On Wednesday, I heard no mention of the overall cost or a fundraising goal. (hh)


14 responses to “Deal proposed to save Cumberland Church”