Dead frogs on the street … 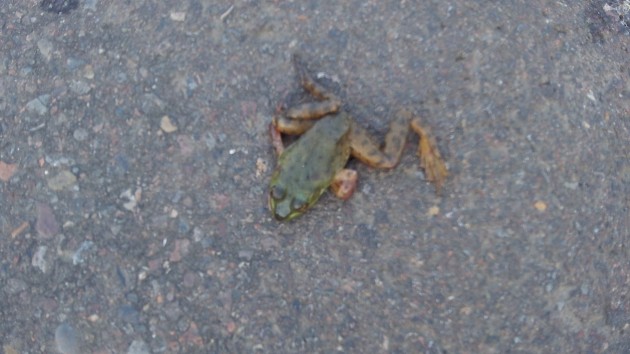 This guy didn’t look too bad, but he was dead nevertheless.

Frogs around the world, according to assorted studies and reports, have been dying of diverse causes such as fertilizer, fungus, depletion of the ozone layer, and — what else — “climate change.” But the late amphibians I saw dotting the pavement on one street in North Albany’s Benton Woods subdivision Thursday probably were done in by something else. 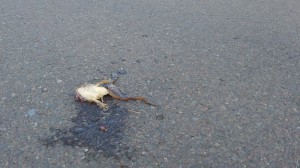 Considering that they met the end of their short lives in the middle of the street suggests that the epidemic that killed them was the automobile. I didn’t count, but in one block of Essex Avenue there must have been dozens of remains, only one or two of them still recognizable as frogs. Most were just wet blobs.

There’s a wetland and pond nearby as well as a farm field, so the layman (that’s me) supposes that during the rain of the last few days they all decided to hop to drier ground. Wrong choice, obviously. But maybe frogs are not great at weighing relative risks.

They would have been better off staying put. Evidently they were not aware that big subdivisions like this one, with streets and houses cheek by jowl, routinely displace habitat that wildlife used to call its own when it was not being farmed. In Benton Woods, that displacement process continues. Construction of the utilities in Phase III looks about finished. This phase will add another 71 houses on the hillside on the development’s north side.

The frogs? Maybe they will learn. Well, no, probably not. (hh)


2 responses to “Dead frogs on the street …”