Dave Clark Path: And after dark? 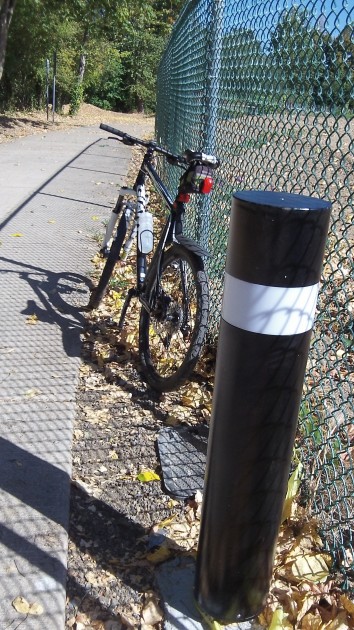 I’m not sure how much traffic there is on Albany’s Dave Clark Path along the Willamette River after dark, but whatever there is it might soon benefit from a little more light. Not necessarily from this thing, though.

This lighted bollard and two or three others have been installed in the last few days along the path where it goes past the future Edgewater Village residential development. How much light they shed I guess we’ll see once they are turned on. (The housing development itself, where streets and utilities were put in this summer, is still awaiting the start of construction of the first house.)

On the eastern end of the riverside path, lack of lighting has come up a few times in city meetings, most recently on Monday when the city council heard a presentation on “crime prevention through environmental design.” Sandy Roberts, a community education specialist with the Albany police, said the proper kind of lighting can have a big effect on the perception and reality of public safety in particular places. The right kind of lights in parks and other places, such as this path, shine light straight down, making things and people visible, rather than causing glare that makes it nearly impossible to see anything.

The bollards were put in by Edgewater and are independent of a plan to add proper lighting to the path. A request to have the city put in lights is being prepared for submittal to the advisory board of CARA, the Central Albany Revitalization Area.

Steps to encourage greater public use of the path, while discouraging transients from camping along it, have already been taken. Vegetation has been thinned so path users can actually see the river and enjoy the view, and spots popular with vagrants have been posted as closed to the public. Better lighting is supposed to be the next step.

Also contemplated: A way to fence off cave-like spaces under portions of the concrete path. On Aug. 4 a young woman was found in one such space, dead of an apparently accidental fire with, according to the police, a meth pipe in her hand. (hh)

2 responses to “Dave Clark Path: And after dark?”