Dark topic on a sunny day: On homelessness 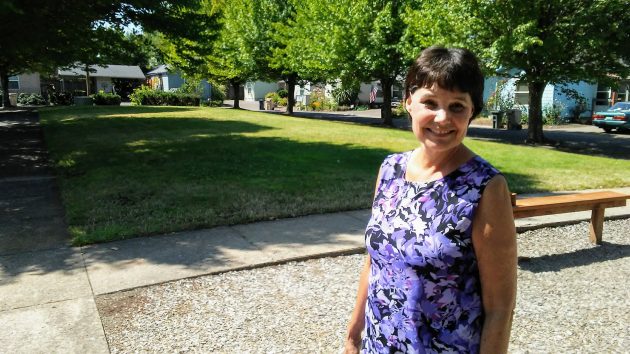 Mayor Sharon Konopa at Periwinkle Place, a housing development she helped start in the 1990s.

By definition, ending homelessness means having people find a roof over their heads. But as Albany Mayor Sharon Konopa has learned over more than 20 years as a volunteer working on housing, this is far more challenging than just providing a roof.

In the Democrat-Herald last week, I read about an Albany coalition that wants to tackle the homeless issue by establishing a village of “tiny houses,” which are huts with utilities and about 150 square feet of living space. The story reminded me of another project, the estabishment in 1995 of Periwinkle Place, a cluster of (formerly) mobile homes off Southeast Queen Avenue.

To check my memory — that Konopa was involved in that effort — I contacted the mayor, and we met at Perwinkle Place on Monday. Konopa corrects me: She joined the project just after it was completed. It was started by Helen Burns Sharp, Albany’s then-planning director.

Periwinkle Place is owned by a non-profit, the Albany Partnership for Housing and Community Development, which has several other projects totaling about 130 units. Konopa has been volunteering as its board president for years.

The 30 trailers at Perwinkle Place are about 700 square feet each, with two bedrooms, a kitchen and bath. The residents are more or less permanent just like tenants anywhere. They pay below-market rent and meet income eligibility standards. There are carports and a well-maintained interior courtyard and playground. An on-site manager and a part-time maintenance man look after the place.

The mayor does not think that setting up tiny-house villages to provide temporary shelter is the answer. She has checked out villages in Portland and Eugene and was not impressed. Pictures she took show some of the units surrounded by stuff just like transient camps elsewhere. 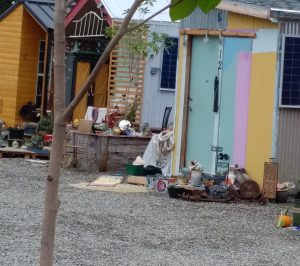 Konopa shot this view at Kenton Village in Portland.

Running any housing project, even of tiny huts, is a challenge because of the ongoing work required — funding, administration, maintenance, cleanup, complying with the landlord-tenant laws, and so on. The challenge is enormous, the mayor says.

Albany, and particularly Konopa, has been trying to do something about homelessness for many years, and yet the problem is getting worse. Konopa says one of the Albany shelters made 15 more beds available and they were quickly filled by transients from Portland. It sounds as though the more we try to help transients, the more transients show up.

As we are talking, on a sunny Monday at Perwinkle Place, there don’t appear to be any easy answers. There is a hard answer. The hard answer is that yes, people need housing, and it’s up to each person to look ahead, starting when young, not screw up, stay away from drugs and booze, and make sure they always have a place to stay. (hh)


14 responses to “Dark topic on a sunny day: On homelessness”