Every now and then, somebody on the Albany City Council will wonder out loud if anything can be done about bicyclists ignoring the traffic laws or otherwise acting stupid. It happened again last week.

Councilor Bessie Johnson raised the subject at the conclusion of the council’s meeting on Sept. 11. “I swear,” she said, “bicyclists in Albany don’t know a law if it looked ’em in the face.” Apparently someone on a bike had yelled at her in her car, and she said she’s had “many close encounters” with bike riders darting in front of her, or not riding within the bike lanes, or not obeying the rules of the road. She wondered if the police should be handing out tickets.

Mayor Sharon Konopa chimed in. She had just managed to avoid a collision with a “gal” who was in a bike lane but going the wrong way.

Bike riders on the wrong side of the street, and going the wrong way in bicycle lanes, are a common sight on Albany streets. It’s unlawful, and endangers not only the riders doing it but any cyclists they meet.

Which brings up a related point: Are cyclists required to use bike lanes when lanes are provided? The law is ambiguous, transportation systems analyst Ron Irish told the Albany Bicycle and Pedestrian Advisory Commission at its monthly meeting back in June.

The state vehicle code says when bike lanes are provided, cyclists are supposed to use them except when passing or turning left, or when there’s debris in the lane, or there’s an obstruction. But: Cyclists can’t be required to comply unless the road authority — city, county, or ODOT — has determined that the particular lane is safe to use. And before making that determination, the road authority has to hold a public hearing, which Irish doubted any road authority in Oregon had ever done.

The bike/ped panel agreed at the time to discuss it again. Its next meeting is on Sept. 24, and the agenda includes this item: “Requirement to ride in bike lane discussion.” (The meeting that day is at 7 p.m. in the Periwinkle Room on the second floor of City Hall.)

Unless the city council holds hearings on the safety of every bike lane on Albany streets, the police may not be abe to cite anybody for riding outside a lane. But they certainly could ticket cyclists going the wrong way, or failing to yield the right of way, or committing any other violation of the vehicle code. But as you know, when you want one there’s never a cop in sight. (hh) 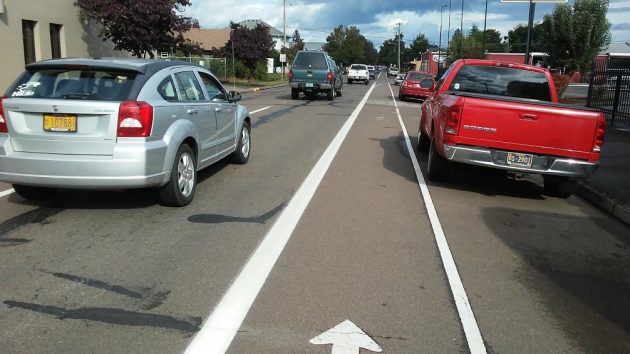 Between parked vehicles and traffic: The bike lane on Second Avenue leading east from downtown