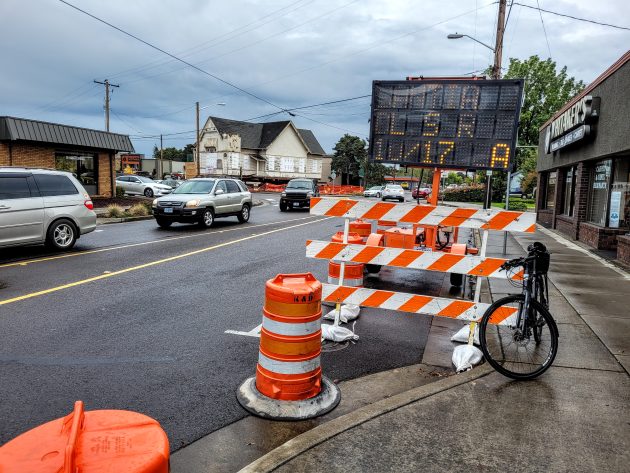 The flickering legend on Main Street says Santiam Road will be closed Sunday for the move of the old church, in the background.

All the t’s seem to have been crossed and the i’s dotted now, so the move of the former Cumberland Church in Albany is set for Sunday, Oct. 17.

Several times the move had to be postponed, most recently because no arrangements had been made for the loss of power along Santiam Road from Main to Pine streets.

That’s why the operation had to be scheduled on a Sunday, not a weekday when businesses along Santiam are open.

Joel Orton, vice president of the Cumberland Community Events Center, announced the new date on the group’s Facebook page. I got the news on a bike ride Wednesday when I passed electronic reader boards on Main Street and Santiam Road, near the starting and ending points of the moving route.

(For some reason, the message is easy to read on those boards but fails to show up entirely in my photos.)

The historic building, constructed in 1892, is being moved to a vacant lot at Pine Street and Santiam. The private nonprofit that is buying the building and the new site from the city of Albany hopes to repair and expand the structure to become an event center.

The move is supposed to start about 8 Sunday morning and may take most of the daylight hours. The group points out that people can catch for free, of course, but donations to the whole event also can be made and would be welcome. (hh)