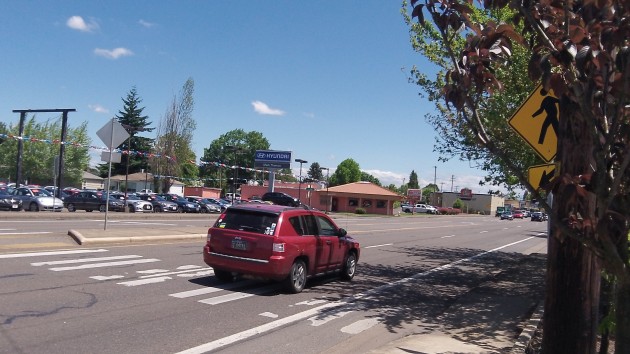 Some people call it a “crosswalk sting.” But it’s not much of a sting because the public is being warned ahead of time, through channels like this and with signs at the scene. The Albany police, who will conduct this operation at two city crosswalks on Tuesday, June 9, call it a “targeted cross enforcement detail.”

The gist of it is that from 8 till noon on Tuesday, people will attempt to cross Santiam Highway and Waverly Drive on two mid-block crosswalks. And the police will have officers ready to pull over motorists who fail to stop for the walkers. This will take place at the Waverly Drive crosswalk between Grand Prairie and 34th, and at the Santiam Highway crosswalk in the 2500 block in front of Fred Meyer.

In the announcement of this operation, the police did not say whether they intend to ticket offending drivers, but the term “enforcement detail” suggests that they will. Participating officers will be paid overtime from a small ($1,470 ) federal highway safety grant, so officers will not be pulled off their regular crime-fighting or patrolling duties for this.

The city says there have been problems at these locations — two children hit on Waverly and many close calls there and on Santiam. And it’s easy to see why. Both crosswalks are in the middle of the block where drivers don’t expect to encounter pedestrians.

The crossings were put there to accommodate people who otherwise would have a bit of a hike to the nearest intersection. But still, it does not seem wise — at least to me — to put crosswalks in the middle of blocks on high-volume roads with lots of traffic signals, even in long blocks. It creates a false sense of safety for walkers.

Another point in relation to crosswalks generally: Motorists are supposed to stop for people “in” crosswalks. I think that means they should not stop for someone just standing on the curb waiting for a long enough gap in traffic to cross at their leisure without holding up traffic. If motorists do stop anyway, they risk rear-end collisions. I’m hoping the Albany officers and their pedestrian decoys will keep that in mind when they conduct their “enforcement detail” next week. (hh)