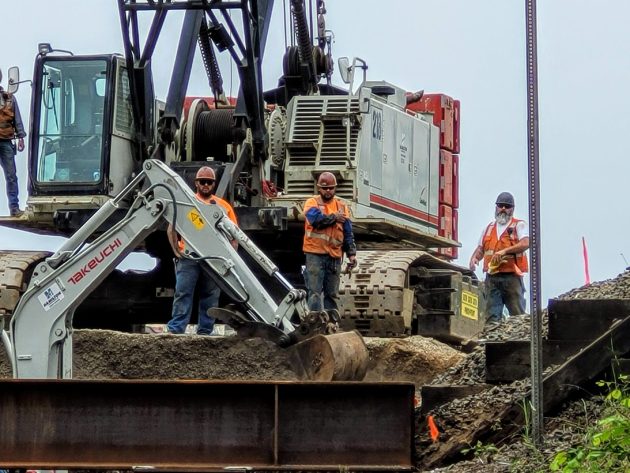 Hard hats and shades: I shot this from across Cox Creek, from the Cox Creek Path, on June 3.

There’s some massive construction work happening on Albany’s Cox Creek, just off the trestle that carries the Union Pacific’s main line. I didn’t know what I was seeing when I went by there a week ago, but now I know a little more.

Here’s what the scene looked like when I went by the same spot on Friday afternoon, June 10:

The structure had grown. It now extended over the creek itself and was supported by four steel piers.

As luck would have it, a few minutes later I ran into someone who works nearby and had knowledge of what was going on there.

The story I got was that the Union Pacific is building a temporary bridge across the creek, just east of the existing one, so that the old trestle  can be torn down and replaced.

Looking at the old wooden structure, you can see why the UP would want to replace it.

The trestle is a few steps away from a vagrant’s extensive camp site on the bank of the creek. On the afternoon of May 30, Albany Fire responded to a fire there. The department sent six firefighters and two engines to put the fire out. The camp looks abandoned now, but the debris is still there.

I emailed the railroad’s public information official in Portland to learn more about this crossing project. You’ll get the details, assuming you want any, if and when I hear back from the UP. (hh)


3 responses to “Crossing Cox Creek: UP makes a move”