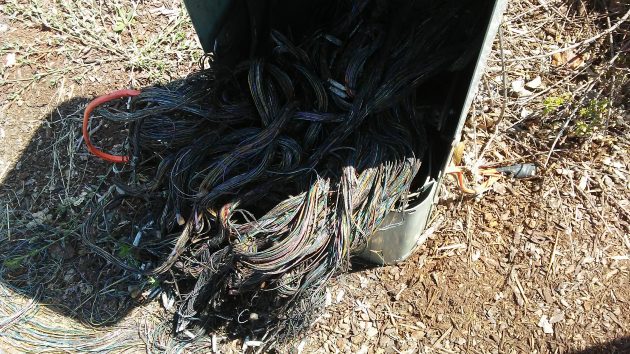 Wires spill from a sidewalk box at Queen and Geary on July 29.

Not too long ago, on a ride on the Perwinkle Bike Path, I came across this mess of telephone wiring at the corner of Queen Avenue and Geary Street. It made me wonder about the vulnerability of our landline telephone system to vandalism and ordinary wear and tear.

I have no idea who tore the cover off this metal box containing, apparently, telephone wires. The wires themselves didn’t appear to be damaged. But it was unsettling to see them spilled on the ground like that. How many voice and data users in the neighborhood would be affected if the wires were cut? And how long would it take to splice them all together again?

Three of four years ago, I once picked up the phone and heard somebody else’s conversation. I called the phone company, and a technician arrived. He busied himself at the metal box out on the street and eventually fixed the problem. Evidently something had gone wrong or come loose, and the wires had to be reconnected in the right order, or to their proper mates.

So now, every time I see the wiring in those curbside boxes — when the boxes have been tampered with, exposing the insides — it’s a sign of possible trouble.

It’s no problem, of course, for people relying entirely on their cell phones. Judging by the way phone books have shrunk in the last 20 years, the number of people relying on old-fashioned phone company landlines has gone down a lot. But for those remaining few, the phone company had better make sure the wires don’t cross. (hh) 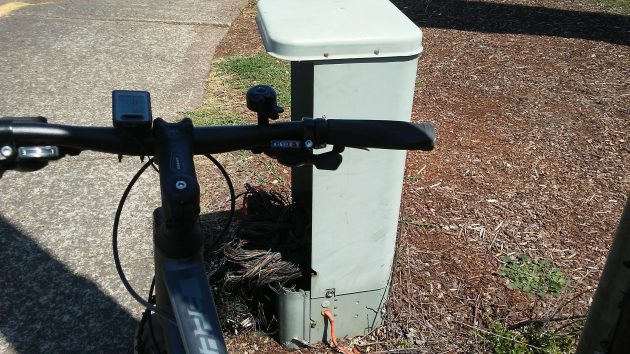 The way it looked from my bike that day,