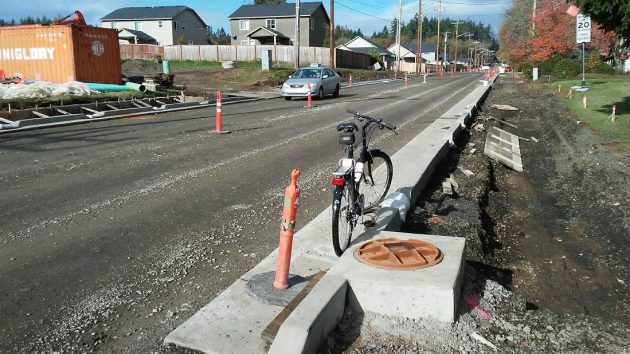 The view up the north end of Crocker Lane on Sunday afternoon..

This is the case of a deadline past and gone. The northern 2,100 feet of Crocker Lane was supposed to be turned into a fully developed city street with a new water line underground by Nov. 3. Looks like finishing the job will take a bit more time.

I asked about the status of this project on behalf of a reader in early October. Chris Cerklewski of Albany Public Works told me then that the contractor was working toward getting the roadway completed by the end of October and finishing the sidewalks and landscaping by the end of November.

Carter & Company Inc. of Salem was awarded the construction contract in May based on its low bid of $1,861,694. According to what Cerklewski told me last month, the contractor will be liable for liquidated damages of $800 for every day beyond Nov. 3 that the project is late.

Though unpaved, the street has been open for local traffic, and a detour is in effect for others.

No word on why the completion date was not met. It may have been a case of a project more complicated or difficult than the city or the low bidder anticipated. The city engineering staff had estimated the cost at about $1.5 million. But the three other bidders all submitted bids of $2 million or more. (hh)

The lede and caption have been fixed to get the direction right, thanks to Kate Huber’s comment below. (hh)