Crocker nearly done; what next? 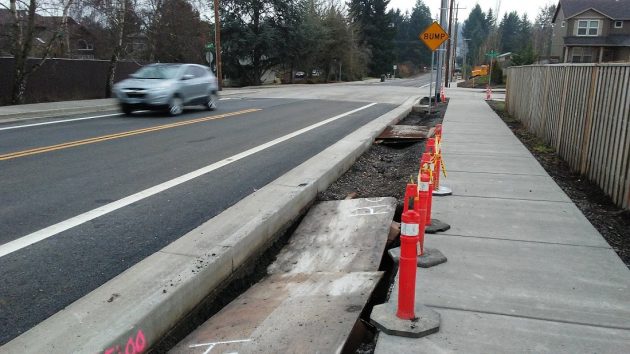 Looking south on Crocker Lane on Dec. 22, when work remained on the landscaping.

The longer-than-expected reconstruction of part of Crocker Lane in North Albany is nearing completion. But residents can look forward to at least two other road projects nearby in the next couple of years.

One is the rebuilding of Gibson Hill Road from Scenic Drive to North Albany Road. Benton County plans to fix the base and completely repave Gibson Hill before turning the road over to the jurisdiction of the city of Albany. On its website, Benton County Public Works says it will design the work in 2018 and then do the construction between 2019 and 2021.

The other is doing something at the intersection of Gibson Hill and Crocker, though exactly what is still up in the air. In 2016, the city council decided to install a full-size roundabout at the T-intersection in 2020-21. But in May 2017, largely in response to complaints from adjacent property owners, the council reversed itself and voted to put in traffic signals. It left open, though, whether the signals would be combined with turn lanes, and if so to what extent.

At the northern end of Crocker, meanwhile, contractor Carter & Company, Salem, is close to completing the construction of 2,100 feet of a full city street. The $1.8 million job started in June and was supposed to be done Nov. 3. That date was pushed back to Nov. 13, and since then the contractor has been assessed “liquidated damages” for a total of $32,000 so far. (Exactly how the city was “damaged” is not clear, at least to me.)

Chris Cerklewski, the city engineer overseeing the project, says the remaining work includes landscaping, plus striping at two concrete intersections. “That work will continue over the next couple of weeks as weather allows,” he adds.

What about the rest of Crocker, you may be wondering, the 3,418 feet that remains in its rural and much-patched shape all the way to Gibson Hill. I have no word on when or indeed whether that section will ever get repaved. The main reason the northern section got such expensive treatment was that the city years ago had wrangled “waivers of remonstrance” from developers of nearby subdivisions, and those waivers were about to run out. (hh)


15 responses to “Crocker nearly done; what next?”