Cracking down on bus stop squatters

Written May 12th, 2014 by Hasso Hering
Comments: one response. 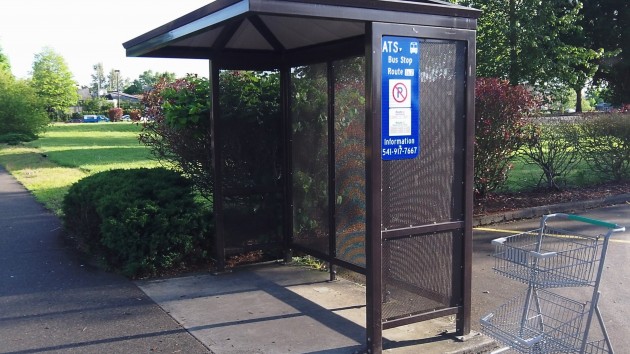 The bus stop near Fred Meyer Monday evening: No bench and no squatters.

Yes, it will be against the law to duck under an Albany transit shelter just to get out of the rain or for any purpose other than to wait for a city bus. But city officials say they would never prosecute anyone merely for getting out of the rain. And, they insist, this proposed new city law is necessary because there is no other way to keep bus shelters from becoming squatters’ camps, or to prevent conditions that keep bus customers from using the shelters. (See the update below.)

The Albany City Council Monday reviewed the draft of an ordinance that it likely will enact on Wednesday night. The new law will say that no one can enter or be within 20 feet of a transit shelter unless waiting to catch a bus. It has a similar provision for Albany Station, the train depot.

One obvious concern, mentioned by Councilor Floyd Collins, is that this law will make it illegal to wait at the station to pick somebody up. City Attorney Jim Delapoer, his assistant Sean Kidd and police Lt. Casey Dorland responded that while various innocuous actions might be made apparently unlawful, no reasonable officer or prosecutor would go after anyone for those things. Instead, this kind of law is the only possible answer to chasing away or citing people whose long-term presence or habits make bus shelters and the train station unpleasant or even impossible for the public to use.

“Right now the bad guys are winning,” Delapoer said. He said that people who depend on the transit system and often have to wait long periods for the next bus need the protection of this measure.

Dorland cited a bus shelter on Waverly Drive near the Fred Meyer store. It had become a frequent vagrants’ camp. Now the shelter is without a bench, apparently taken out in an attempt to keep people from using it as a bed and sacking out. (hh)

On other, perhaps more weighty matters, the council agreed to act Wednesday on a resolution initiating a possible assessment district to improve parts of Crocker Lane, Valley View Drive and Bloom Lane in North Albany. Councilors also heard the staff’s justification for a 6-8 percent sewer rate increase in July. And they postponed consideration of a police-proposed law on pawn shops and second-hand stores to keep better track of stolen goods. Several store owners had misgivings, and the council agreed to hold an evening meeting to discuss the ramifications with them before taking action. (hh)

POST SCRIPT: As expected, the city council on May 14 adopted the transit shelter law, but it was a close call. Mayor Sharon Konopa broke a 3-3 tie and voted for the ordinance. City Attorney Delapoer said the law likely will have “unfortunate consequences” for some law-abiding people by making harmless conduct illegal. But he said it’s the only way to deal with people misusing bus shelters. The ordinance was copied from Metro, the Portland transit agency. (hh)


One response to “Cracking down on bus stop squatters”