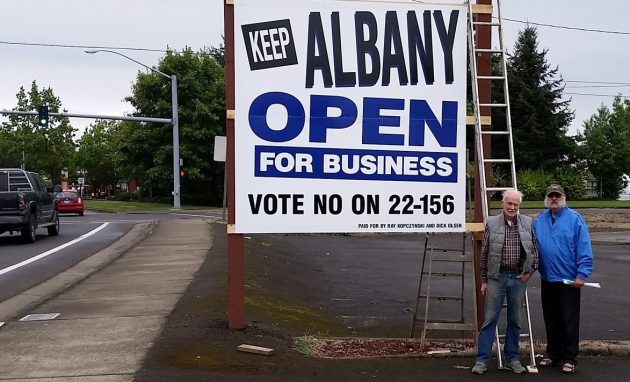 Olsen and Kopczynski may be thwarted on recreational pot despite their successful campaign.

Open for business? Well, not exactly, at least where marijuana is concerned. A day after Albany voters overwhelmingly repealed the city council’s ban on commerce in recreational pot, Mayor Sharon Konopa and the council majority appeared ready Wednesday to impose tight restrictions on where pot stores could open.

Councilman Ray Kopczynski, the chief campaigner for overturning the city ban, forcefully argued against council action. There’s no good reason to have tight restrictions that may stop any additional recreational marijuana dispensaries, he said, or words to that effect.

(I wasn’t at the meeting because of illness, but I tried to follow it on TV despite the bumpy camera work, long angles and mumbling sound when people with soft voices talked past their microphones. The city’s website is a better way to follow those sessions from afar, but on Wednesday it was on the blink.)

The marijuana restrictions were added to the agenda at the last minute and were not available before the meeting, as is customary. “Why such a rush?” Kopczynski asked. Any anyway, he’d like to see detailed new maps showing where in Albany recreational pot businesses would be allowed under the proposed amendments to the municipal code.

Kopczynski blocked a vote on the code changes, as any one member can do under council rules. Konopa said the amendments would come up for a vote at a council work session Nov. 14. But before that happens, he and fellow campaigner and Councilor Dick Olsen should insist on the detailed maps that Kopczynski requested.

Nearly 15,000 city voters decided to end the council’s ban, with about 9,000 on the other side. That’s the kind of mandate that may be risky to ignore. (hh)