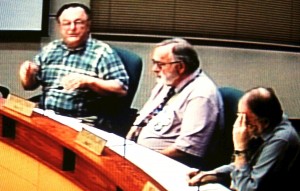 Suppose you’ve been to the dentist on a Wednesday afternoon and don’t really feel like sitting through an Albany City Council meeting that night. But you don’t want to miss out on the fun, so you tune your old TV to cable channel 23 at 7:15 and watch the proceedings there. And as the council chugs through its agenda for the night, you can think of some things that would make these telecasts easier to watch.

First, though, you are grateful that the city makes this TV effort at all. You don’t want to sound like the guy who watches a poodle reciting the Declaration of Independence and then complains about the dog’s French accent.

Still, it would be nice if council members were mindful of the audio aspect of the broadcast. That would mean they would always talk close to and into their microphones, the way Councilor Bill Coburn did the minute this was written, so that all their remarks would come across.

It would also be helpful if the picture went along with what you hear. Sure, you realize that the cameras are stationary, and there are no camera operators to zoom in on the action. Still, if planner Anne Catlin is talking to the council from one side of the council table where staff members sit, it would be nice for the camera aimed at that part of the room to be switched on.

Watching the proceedings from your recliner is a lot easier than to follow them looking up from the not-super-comfortable chairs the city provides for the audience. (Which invites the belief that council meetings might be shorter and debates more concise if councilors had to sit on the type of chair the audience has.)

What else would make the council cable casts an even greater success? Breaks after every 45 minutes — with commercials if need be — so a guy could briefly leave the room. (hh)


One response to “Council TV: Watching from a better chair”