Council TV: ‘For the viewers at home…’ 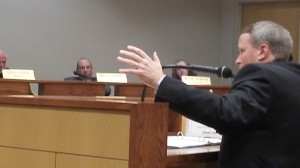 In a suit, Public Works Director Mark Shepard makes a point related to a 2 per cent water rate hike, which the council approved.

Something was different about the Albany City Council’s meeting on Wednesday night, Feb. 13. Everybody seemed to be more dressed up than normal, and several of the men among council members and the city staff wore coats and ties. What prompted all that sartorial splendor? Maybe it was that for the first time, the meeting was broadcast live on cable, as it happened.

For a few years now, the Albany City Council has video-recorded its regular meetings, shown them online in real time and replayed them later online and on cable. Wednesday’s live broadcast on cable channel 28, though, was a first. This has seemingly enhanced an effect that outsiders had noticed before: Some of the talk is aimed at the cameras. “For the viewers at home,” a council member is likely to say before launching into an explanation that all the other councilors and most others in the room already know. They know because the issue was discussed before, most likely at one of the Monday afternoon work sessions that usually precede the regular meetings on Wednesday nights.

Ideally, the work done at work sessions ought to allow the council to handle action items at regular meetings without an exhaustive rehash of all the relevant arguments and facts. But of course the work sessions are not online; they are not even recorded, though minutes are kept. And even if they were replayed online or on TV, nobody could expect members of the public to stay glued to their screens for hours at a time.

The result is that councilors now and then feel obliged to explain things to the handful of people — surely it can’t be more than that — who tune in the Albany council on Wednesday nights on their TVs rather than watch American Idol. So besides upgrading the dress code, putting meetings on TV has had the apparent effect of making council meetings a little longer than they’d have to be. (hh)