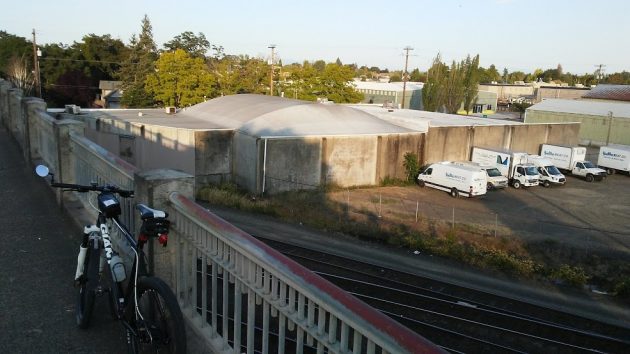 The Van Vleet plant as seen from the Pacific viaduct on July 7.

The Albany city budget is so tight over the next two years that a few positions in police and other departments are going unfilled. But this does not apply to the city’s reserve fund that’s available to goose the local economy.

The city council Monday agreed to lend the Van Vleet Meat & Food Products Co. $744,000 to help finance an expansion of storage and freezer capacity at its plant on Jackson Street and Ninth Avenue. The loan, for 10 years at 4 percent interest with a balloon payment at the end, is to supplement private financing through Columbia Bank.

The details escape me, though some of them were explained at the council’s work session Monday in a way I didn’t get. A written outline ahead of time would have helped. But the council didn’t get one with its agenda, as you’d think would be customary and certainly helpful for a major financial action like this.

The council had previosly agreed to make a loan to Van Vleet, but the details remained to be negotiated. Monday’s action, which was unanimous, was to authorize the city manager to sign the loan agreement.

The company is in the wholesale business of supplying food — everything from appetizers to veal, according to its website — and other items to restaurants.

The agreement says the borrower “has proposed to use city funds for an appropriate governmental purpose.” It doesn’t say what that is, but there was talk about street improvements the company would have to pay for, and the street then would be useful to other property owners as well. (hh)