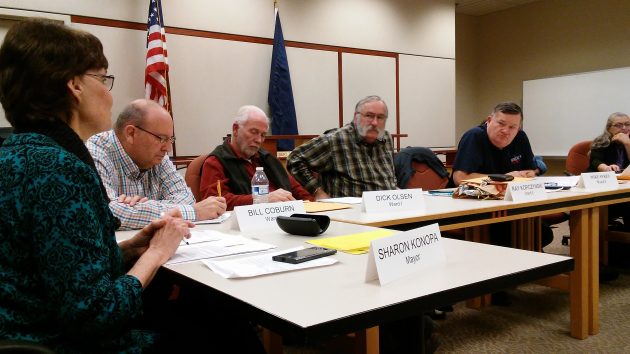 New Councilman Mike Sykes, second from right, asked why Albany has not done more to maintain streets over the years.

The Albany City Council is working itself up to a plan for raising the money it will take to upgrade and maintain city streets, many of which are in poor shape. Early estimates say the city would need $10-19 million a year, depending on how fast the council wants to accomplish how much.

For the second work session in a row, the council Monday got a briefing on the condition of pavement on Albany streets. It also got ballpark estimates of the gap between what the city spends on streets (about $1.6 million a year) and what it needs.

The city has 187 miles of streets. Based on the latest assessment, in 2016, the council learned that most main arterials and collectors are in good to fair shape, but pavement on about half of local streets is poor or worse. The poor streets are concentrated in the older parts of town, while the pavement in subdivisions built in the last 20 or 30 years is generally good.

Councilman Mike Sykes, in his second month on the council since being elected from Ward I last fall, wanted to know why the streets had not been better maintained all along, since their deteriorating condition was obvious to everyone. “We haven’t been spending money wisely,” he said.

The answers he got included inflation, the city’s too-small share of the gas tax, other budget priorities, and the general tendency to let maintenance go until it becomes an urgent need and then to borrow money. It’s like homeowners not putting away money every month for a new roof — until the roof fails and then taking out a second mortgage, someone said.

The city’s options include a local gas tax, local assessment districts for residential streets, and bond issues to be repaid from property taxes. Some 10 or 15 years ago, voters rejected the latest street bond proposal after approving one that paid for rebuilding some major streets. Also possible, a “street utility” fee that would be collected every month.

Council discussions of all this with public works managers likely will continue in March. (hh)