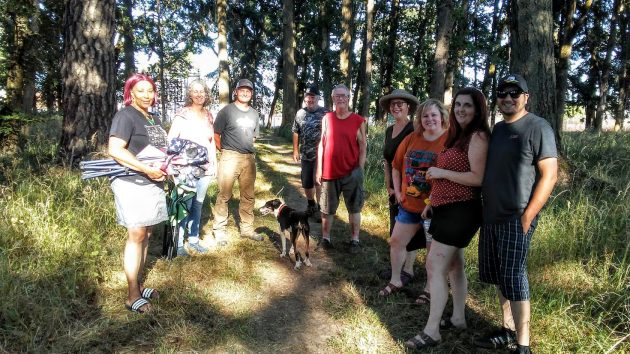 The future owners of Hazelwood Park (the five on the right) and some of their neighbors gathered at the park one day in early July.

Hazelwood Park will be sold to three families living next door for $120,000, the Albany City Council decided on Wednesday.

Theirs was the only offer after Creating Housing Coalition withdrew its offer of $350,000. The nonprofit plans to build a village of tiny houses for the homeless, and it realized that developing the 2.58-acre park site at 1999 Queen Ave S.W. would have cost too much.

The three families — the Schukows, the Pulvers, and Zeller-Bray — live on 17th Avenue adjacent to the north boundary of the little park. They plan to divide the property in three and add each segment to their yards, preserving the natural scenery including tall oaks, firs and other trees.

The families wowed the council with video presentations on how much the property meant to them, and how they and their children had used it and taken care of it over the years.

The vote to sell it to them was unanimous. Council members were impressed by the neighbors’ passion for the park. They also expressed their admiration for the gracious way the housing coalition had dealt with the families and bowed out of the purchase competition.

This is the first time I can remember — going back 40-some years — that the city of Albany has sold a developed —  albeit minimally developed — park.

Hazelwood is out of the way, at the western edge of the city, and gets little use by the public. Mayor Alex Johnson II said that before he went there to check it out, he had never known the park existed.

Albany’s master plan for parks said Hazelwood was not needed in 2006, and the recently updated version of that plan said the same thing. So the council declared the property surplus and put  it up for sale.

I would guess it will take a little while for the sale to close. So if you want to see Hazelwood Park before it becomes private property, better get out there soon. (hh) 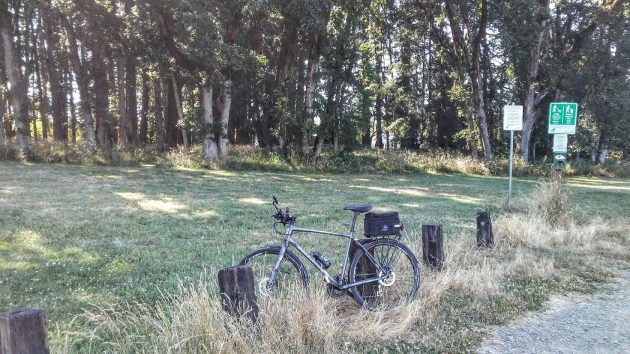 Looking at the wooded section of the park from the unpaved parking lot.