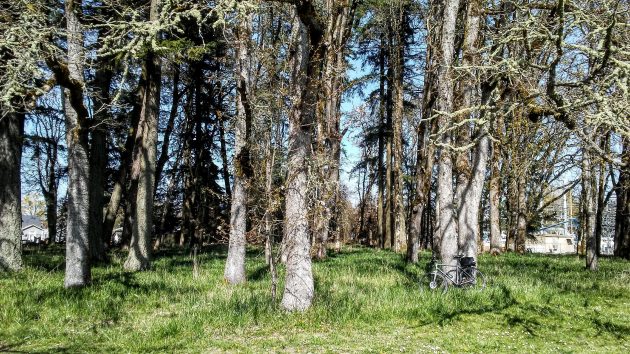 Some of the trees at Hazelwood Park as they looked on April 6. The council has voted to sell the park.

Close neighbors told the Albany City Council Wednesday how much little Hazelwood Park means to them, so much so that they have taken to trimming the grass and keeping ivy from climbing the trees. Half an hour later the council voted 5-1 to put the park up for sale.

The 2.5-acre park is hidden at the end of a gravel driveway between S.W. Queen and 17th avenues, and it’s sandwiched by two electrical substations. The council also voted to dispose of an undeveloped pond off Ridders Lane in North Albany.

Only Councilman Dick Olsen voted against having the city dispose of both park properties. He believes their neighbors appreciate both sites.

Parks Director Kim Lyddane said she had been contacted by parties interested in both properties. The council authorized her to determine the details of the selling process, and then to report back with proposals in three months.

When that time comes, secrecy is likely to shroud the process. City Attorney Sean Kidd recommended that the council consider offers to buy the properties, including the price, in executive sessions. Such meetings are closed to the public, and under Oregon law reporters are allowed to attend only on condition they don’t report what is said.

One party that has expressed an interest in Hazelwood Park is the Creating Housing Coalition, a private nonprofit that wants to build a cluster of tiny houses there to help people who otherwise might be homeless.

The group’s president, Stacey Bartholomew, was appointed to the council in January. On Wednesday she voted with the majority to declare both park properties surplus and offer them for sale. (On two subsequent motions — leaving the sale arrangements to the parks director, and allowing her three months before reporting back — Bartholomew did not vote either yes or no.)

Before the properties can be sold, the council must conduct a public hearing. But that does not take place until a proposed sale has been negotiated, so usually the hearing is a formality. (hh)

The story has been edited to add that on two other motions regarding how to proceed with the park sale, Bartholomew did not vote yes or no.


8 responses to “Council puts Hazelwood Park up for sale”