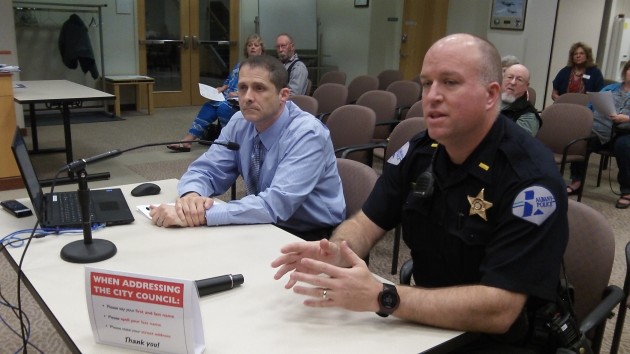 Albany will continue its Redflex contract for red-light cameras, the city council decided in a 5-1 vote Wednesday. Councilor Dick Olsen voted no.

With little debate, the council accepted the recommendation of Police Chief Mario Lattanzio to renew, without calling for bids, the contract with Redflex Traffic Systems for seven years when it ends next February.

The existing camera system at Queen Avenue and Geary Street, the only one in Albany, works well and it doesn’t cost the city anything, so why change, the chief told me after the meeting. Mesa, the Arizona city where Lattanzio worked before taking the Albany job, had 34 traffic cameras from another vendor that had lots of problems, he said.

Lattanzio and Police Lt. Alan Lynn showed the council videos of red-light runners taken by the cameras at Queen and Geary. The cameras record red-light violations southbound on Geary and west-bound on Queen. In 2015, the police issued 509 citations based on camera evidence. In the fiscal year that ended last June, the city collected about $37,600 in fines. Redflex gets $60 for every ticket on which the city collects. The tickets run $260 each.

Most of the violations recorded by the Albany cameras are turning right on red without coming to a complete stop first.
Though it’s impossible to know whether this applies to Albany, sometimes red-light cameras result in an increase in rear-end crashes, but those tend to be less severe than T-bone crashes in the intersections.

Lattanzio would like to have cameras deter red-light runners at Santiam Highway and Waverly Drive as well. But that would require a study first because Santiam is a state highway. He said he’d come back to the council for any decision on getting Redflex to install additional cameras. (hh)