Council: No roundabout on Gibson 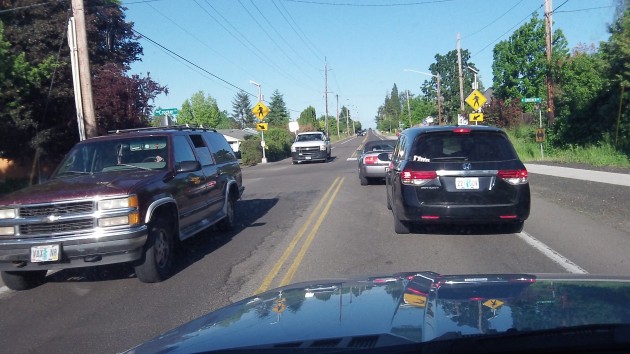 Reversing a decision it made a year ago, the Albany City Council now says it does not want a full roundabout at the junction of Gibson Hill Road and Crocker Lane in North Albany.

The council changed course at a work session Monday when it voted 5-1 to explore putting a traffic signal at the intersection. Councilman Bill Coburn, who made the motion, said he had in mind some kind of hybrid between two types of signal layouts considered by consultants David Evans and Associates (DEA) last year.

One would be a single-lane traffic signal costing an estimated $538,000. The other would have turn lanes and cost nearly $1.9 million, according to last year’s DEA estimate. Coburn’s idea was that maybe, a signal arrangement with fewer turn lanes could be worked out.

Councilman Ray Kopczynski voted against signals. He wanted to stick with plans for a full roundabout, which DEA estimated would cost $1,463,000.

A full roundabout would take up a good portion of the residential lots on both corners of the junction. Councilwoman Bessie Johnson says she doesn’t want to take people’s property, and most of her colleagues appear to agree.

The family living on one of the properties told the council they didn’t want to lose a big chunk of their corner but they could probably live with a smaller roundabout.

Councilors Rich Kellum and Bessie Johnson proposed a “mini-roundabout,” which would take far less property, but the council voted 4-2 against that.

The issue arose because last year, the council put the modern roundabout in the city’s Capital Improvement Plan for 2020-21, and to get started with property acquisition, the city staff now needs some preliminary engineering of the project. Before incurring that expense, the council was asked if it was sure it wanted to stick with the plan. It did not, as it turned out. (hh)


16 responses to “Council: No roundabout on Gibson”