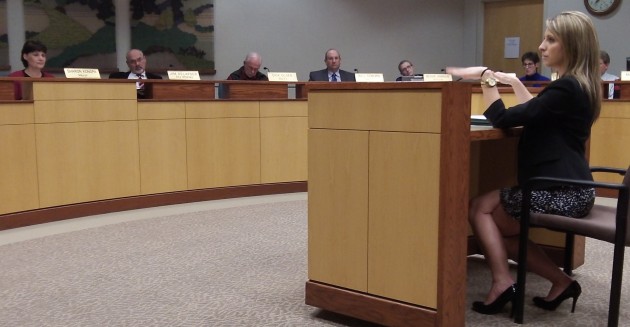 Stephanie Marcus of the Recycling Cooperative answers a question from the council.

Albany stores and customers can forget about using a central bottle and can redemption center yet this year. Ignoring a unanimous recommendation by the city planning commission, the city council Wednesday agreed instead with a city staff recommendation that prevents the so-called “bottle drop” from being established in the vacant former Salvation Army thrift shop at 1224 Santiam Road S.E. The council voted 4-2 to deny a change in the “Main Street Zoning District” that would have allowed the redemption center. The Oregon Beverage Recycling Cooperative had wanted to buy the long-unused property near the Union Pacific and Portland & Western tracks from the Salvation Army and open a redemption center there by this summer.

Five people spoke against the request at Wednesday’s public hearing, saying they feared more traffic, noise and homeless people, among other factors. Stephanie Marcus of Portland, coordinator for property acquisitions for the cooperative, said the building would be sound proof. She said bottle drops twice as big as this one generate traffic of 20-25 cars per hour. And other centers of this type have had no problems with the homeless. Some of the others are next to retail shops, pizza parlors and sales offices.

The city planning staff and Kate Porsche, economic development director and urban renewal manager, had opposed the redemption center on the grounds that as a regional business attracting people from all over it would not fit the city’s vision of the Main Street area near Santiam Road as a nice neighborhood of residences and small shops. The council got letters against the proposal from a homeowner who restored a historic house several blocks east of Main Street and from Innovative Housing Inc. of Portland, which received urban renewal and other public financing to build the planned Woodland Square apartment complex at Pine Street and Salem Avenue.

The council’s vote was a preliminary one. The staff plans to write findings to back up the majority and bring them back for a final decision. Councilors Bessie Johnson, Bill Coburn, Dick Olsen and Floyd Collins voted to prevent the redemption center at the proposed site. Ray Kopczynski and Rich Kellum were for it. Marcus left before she could be asked what if anything the cooperative planned to do in reaction.

Under the state law known as the Bottle Bill, stores within two miles of a central redemption center may refuse to accept containers. Walmart, just outside that radius, could limit returns to 24 items per day. (hh)