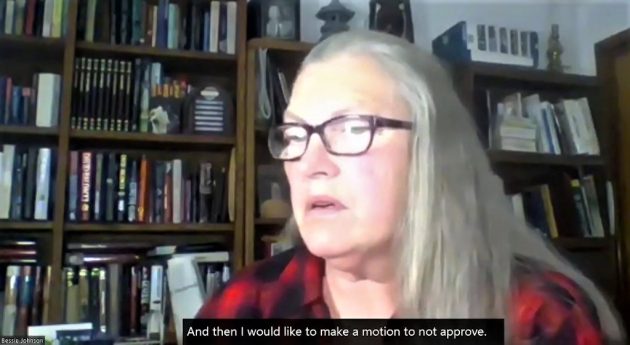 In this screenshot from Wednesday’s meeting, Councilwoman Bessie Johnson moves to reject the appointment of former Mayor Sharon Konopa to the planning commission.

In a rare insult to a nominee who served Albany in public office for 24 years, the city council Wednesday rejected the nomination of former Mayor Sharon Konopa to a vacancy on the city planning commission.

Councilwoman Bessie Johnson led the opposition to Konopa’s nomination to the unpaid volunteer position. She said Konopa “does not fit” with the planning commission because in the past she had been “against growth and development and anything that goes with it.” She contended that the former mayor would not be a “neutral person” on the planning board.

Konopa served 12 years on the city council and then another 12 years as mayor before losing her re-election bid in 2020.

She had often argued that large-scale land development does not pay for the indirect costs it generates for the increased city services it requires over time. She was also against changes in state law and the local code to increase the population density in established neighborhoods of single-family homes.

Councilman Ray Kopczynski, who had vigorously disagreed with Konopa on the density issue, nevertheless nominated her to the planning commission. There is no one, he said, more knowledgeable about the development code, and he considers her eminently qualified.

Kopczynski’s was the only vote in favor of Konopa’s apppointment. Dick Olsen “passed.” Voting to kill the appointment, besides Bessie Johnson, were Marilyn Smith, Matilda Novak, and Stacey Bartholomew.

By email after the meeting, I sought Konopa’s reaction.