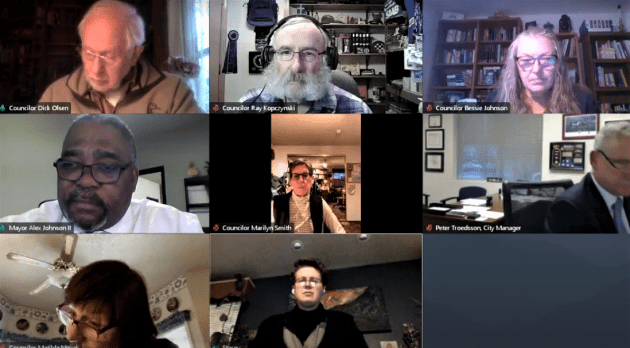 The Albany City Council has a new member from Ward 2. She is Stacey Bartholomew, who has spearheaded a group trying to build a community of tiny houses for the homeless.

The council selected her Tuesday to serve the two years remaining on the the term of former Councilor Alex Johnson II. The vote was 4-2 before the council then made it unanimous.

The selection snubbed former Mayor Sharon Konopa. The council discounted her 24 years of service on the council — and her demonstrated lifelong commitment to the betterment of her community — before she was narrowly defeated by Johnson last fall.

There were four candidates: Bartholomew, Konopa, Scott Lawley, and Amanda Dant. The council interviewed all four in an online special meeting, asking them softball questions that had been given to the candidates ahead of time. Lawley and Bartholomew were the top candidates of most of the council.

Bartholomew, a mental health professional by training, moved to Albany in 2015. She listed her job as assistant construction manager for Albany Area Habitat for Humanity.

She’s also president of Creating Housing Coalition, which strives to build a community — “Hub City Village” — of tiny houses in Albany to provide shelter for some of the city’s homeless.

Bartholomew will be sworn in Wednesday and join the council for its regular meeting Wednesday night. (hh)