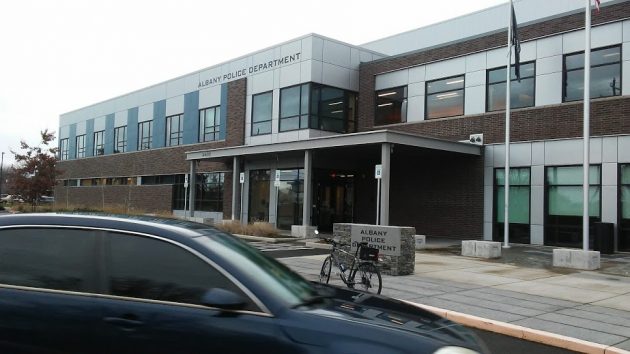 Someone heads for the secure, gated parking lot behind the Albany police headquarters Thursday.

The Albany City Council is playing it safe –if that’s possible in elections — when it comes to the renewal of a longstanding extra property tax to support the police and fire departments.

On Wednesday the council unanimously voted to keep the tax rate the same when asking voters to renew the “fire, ambulance, and police local option tax” in the primary on May 19, 2020.

The rate has been $1.15 per thousand dollars of assessed value. The city staff had recommended a 10-cent boost, but City Manager Peter Troedsson acknowledged in a memo: “The safest path forward is to leave the rate untouched.”

The state constitution allows voters to approve “local option” levies in addition to the fixed tax rates for up to five years. Albany voters first did so in November 2002 to augment the budgets of the fire and police departments, starting with 95 cents per thousand and going up to $1.15 per thousand in 2012.

The current tax, which amounts to about $4 million a year, is authorized through budget year 2020-21. The council has always put the levy up for renewal a year before it expires so that, if it’s ever rejected, there is time to try again.

There was no council debate about this on Wednesday night. Rich Kellum said he preferred going with the same rate until certain other spending issues are settled. Bessie Johnson made a motion to that effect, and the vote was 6-0 in favor. (hh)