Outside the evacuation center at the Linn County Fair & Expo on Wednesday afternoon.

Albany City Council members Wednesday urged townspeople to donate supplies to the evacuation shelter at the Linn County Fair & Expo, set up for residents who fled the wildfires in east county and may have lost their homes.

Councilor Alex Johnson II brought this up at the end of the council’s regular meeting Wednesday night.

“Our neighbors, they need our help,” Johnson said of the people who have found shelter at the fairgrounds. He said he and many others had been delivering items to the county’s evacuation center.

Councilor Bill Coburn had taken a load of clothing there and said he was impressed by the high level of organization he witnessed.

Councilor Mike Sykes said one way to help is to provide gift cards from local stores so the people can buy what they need. He’s done that, he said, and he wondered how the gift card thing was working out for the people affected. Johnson said he’d find out.

The latest local information on the fire disaster on the slopes of the Cascades, and related topics including advice on how to help, can be found on the Facebook page of the Linn County Sheriff’s Office, and on the social media of other emergency services, including cityofalbany.net.

Councilors and the city manager talked a bit about Albany’s response to the fire disaster on the slopes of the Cascades. Among other things, besides supporting the overall response by the county and others, Albany has closed its dog park near the fairgrounds so it can be used as an overflow place for livestock from the evacuation areas. Also, the city airport may become a staging area for helicopters.

Fire Chief Shane Wooton said unlike communities closer to the fires, Albany was not under immediate threat and had sent a fire crew to help on the Santiam Fire in the canyon.

Wooton urged everybody to sign up for Linn-Benton Alert, a system that notifies people of emergencies via the phone, and to become familiar with the three-level “Ready, Get Set, Go” system of ordering evacuations.

(The link to sign up for the alert system is found on the Benton County Sheriff’s Facebook page. It is here. ) 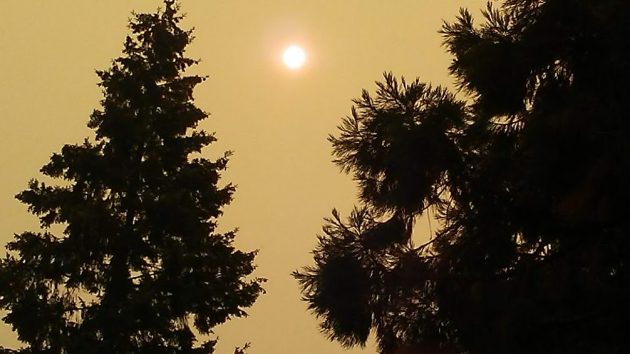 Wednesday the smoke over Albany had thinned enough to let the sun shine through  at mid-day.

6 responses to “Council: Help our neighbors who fled fires”