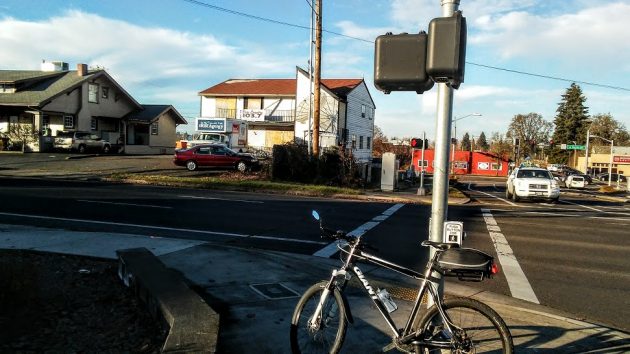 Looking north across Ninth Avenue at 1207 Ninth and the city-owned strip between the structure and Oak Street to the right.

The long-vacant building at the northwest corner of Ninth Avenue and Oak Street came up before the Albany City Council on Nov. 30. The underlying question: Can the former radio station building ever be used again?

A banner outside still advertises KXPC, an FM station that moved away or quit broadcasting in 2009.

In 2015, the property was sold for $100,000 to “H.O.P.E. Albany Inc.,” an entity incorporated in 2014 by insurance agent Ron Brockmann for the purpose of, according to the state registry, “blessing the community with random acts of kindness.” Brockmann dissolved the corporation in 2019.

At Monday’s council work session, city transportation systems analyst Ron Irish said the owner would like to fix up the building for business use. It’s been unused so long that this requires a site plan approved by the city, and that in turn will require more parking including a handicapped space. But there’s no room on the site for the required spaces.

As it happens, between the building and Oak Street there’s a sliver of city-owned land, left over from the parcel the city acquired when it extended Oak Street one block from Ninth to Pacific a few years ago.

The solution to the parking issue may lie in using part of the city land. The council authorized Irish to try to work out a deal by which this can be accomplished, perhaps by selling the city land or leasing it.

On the tax rolls, the small lot and building, on one of Albany’s main drags, have an assessed value of only $46,430. The assessor’s summary report says an inspection in 2015 found lots of interior damage because of vandalism, the exterior needed “significant work,” and there was “limited parking.”

We’ll find out if the parking dilemma can be solved when Irish reports back to the council, probably next year. (hh)