Council has doubts about gas tax 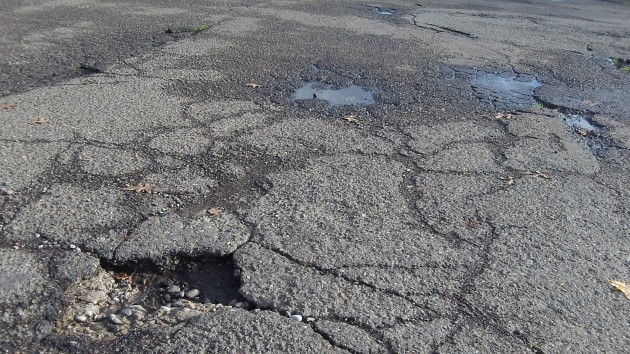 Chances are small that particular streets would be repaired in our lifetimes even if voters approved an Albany gas tax.

Albany City Council members seem to like, in principle, the idea of a local gas tax to pay for fixing streets badly in need of repair. But they have doubts whether this fall is the right time to ask voters to approve such a tax, or whether there’s enough time between now and then to explain the proposal well enough so it will pass.

Prompted by Mayor Sharon Konopa, the council kicked around a city gas tax at a work session Monday. One central issue was whether Corvallis was preparing to put a similar measure on the general election ballot there. Konopa thought the Corvallis council was waiting for Albany to make the first move. Others including Councilor Floyd Collins said they’d been told earlier that Corvallis would not be ready for an election this fall.

Who cares, you may be thinking. If Albany had a local tax and Corvallis didn’t, or vice versa, would motorists other than commuters make a 20-mile round trip in order to fill up where gas cost 3 or 5 cents less? In any case, the way I heard it, Albany officials will try to nail down whether or not Corvallis plans to put a gas tax on its ballot for the election Nov. 8.

Konopa pushed for an election in November, and Councilor Bill Coburn seemed to agree, saying it’s not a complicated issue and voters understand that money is needed to fix streets that are falling apart.

Others had doubts. Councilor Bessie Johnson thought it’s too late now to prepare for a November election. She also demanded that any ballot proposal guarantee that tax revenue be used only for paving work. She wanted none of the money spent on engineering, but others explained that engineers would have to prepare paperwork to put paving jobs out to bid.

Collins, a retired public works director, fully supports more revenue for street repairs. But he said the city should first complete enactment of a storm water utility fee — or rain tax, as I call it. The council expects to impose a mandatory storm water service fee in the fall, to be effective next spring.

Councilor Dick Olsen said the general election will likely see a heavy turnout and voters will be in a “negative mood.” Besides the presidential election, Oregon will have to decide on a state ballot measure by public employee unions calling for a big corporate tax increase, one that likely would raise prices and have the effect of a general sales tax.

According to the city staff, a local 3-cent gas tax might — and this was pretty much a guess based on the experience in Springfield — raise $750,000 in additional revenue. Collins noted that this amount would pay for rebuilding two blocks of a local street. At that rate, fixing all the streets that need it would take more than 200 years. So identifying street projects before the election would hardly persuade many people that if they vote yes, their street will get fixed.

All this may come up again Wednesday night at the council’s regular meeting. But unless Corvallis tells Albany that “yes, we are going ahead and are counting on you to do the same,” my guess is that the council will put off consideration of a local gas tax until next year. (hh)

7 responses to “Council has doubts about gas tax”