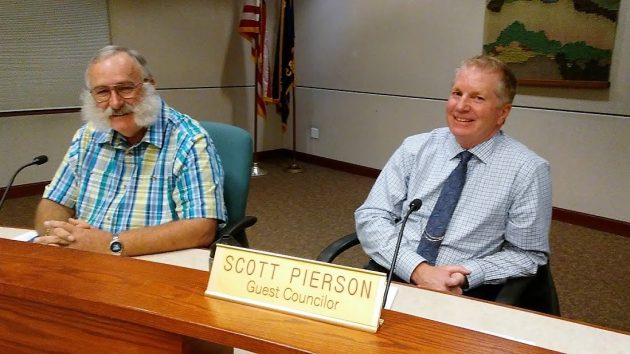 Scott Pierson, right, at the Albany council meeting Wednesday. Next to him is Ray Kopczynski, one of two votes Monday against Pierson being named a guest councilor to sit in for vacationing Mike Sykes.

Scott Pierson sat in on Wednesday’s Albany City Council meeting as a nonvoting guest, and the way he was selected drew objections from a new political action committee that intends to work for city council change.

Liz Irish, speaking for Albany Community Together, addressed the council and charged that Pierson’s selection at Monday’s work session “falls short of the degree of accountability and visibility that we expect from our public representatives and raises serious concerns about the council’s desire to adhere to their own prior resolutions.”

The council voted 4-2 Monday to approve a motion by Rich Kellum to name Pierson to sit in for vacationing Mike Sykes as a nonvoting member for as long as Sykes is on his current vacation, which apparently will mean for several meetings. Guest councilors sitting in for absent members “once” were authorized in a 2009 council resolution, and Pierson says he served in this role before, for Floyd Collins several years ago.

The appointment was not on Monday’s agenda. Kellum made his motion under “business from the council.” Sykes was absent but cast his vote via cell phone from wherever he was traveling. Councilors Ray Kopczynski and Dick Olsen voted against the motion, and without Sykes’ fourth vote in favor it would have failed.

Pierson is a member of the city budget committee and a leader in the Albany Chamber of Commerce. He also chairs a city committee on the hotel room tax. He thanked the council for allowing him to sit in and promised he would do his best to represent Ward I while Sykes is away.

Liz Irish read the council a three-page statement making several points, among them that the resolution allowing for guest councilors was not strictly followed, and that appointing someone should have been announced ahead of time after the same move was defeated at a meeting two weeks before,.

From her and others in the audience, I learned that Albany Community Together is a new political action committee that intends to be active in local election campaigns, especially for city council. It has a website that lists its board of directors and other information, and you can find it here. (hh)