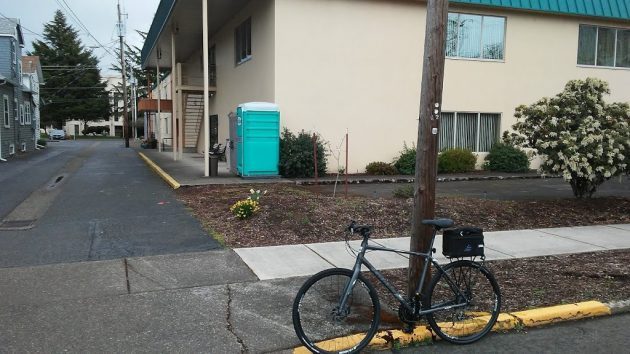 The portable toilet outside First Christian Church, photographed in March.

Albany City Council discussions about the portable toilet outside a downtown church are probably over — for one year, at least.

On Wednesday, the council voted 5-1 to grant the First Christian Church a “waste nonconnection permit” as allowed under the city development code. The permit — in the form of an email application submitted by the church — is good for one year but can be renewed for additonal one-year periods as long as the church applies each time.

The church installed the portable outhouse last fall to solve a problem, namely homeless people relieving themselves on the grounds around the building as they were hanging out there after partaking of the church’s periodic free meals. City officials said portable toilets are not allowed there, even though there are many such facilities for public use at city parks and school sports fields.

The church appealed to the council, and in August four councilors said all right, the thing can say as long as the chuch applies for a permit.

The lack of an official Albany portable toilet permit form did not prevent the church from following through, and the council said OK again on Wednesday.

Councilman Mike Sykes didn’t like it. He said this was a “slippery slope” leading to other such requests. He objected that the church didn’t have to pay a fee for the permit. People shouldn’t be camping on the church’s parking lot, and having the outdoor toilet encourages them to do just that, he said.

Councilor Rich Kellum, who had objected before, didn’t this time. But he encouraged the church to patrol its parking lot to discourage unauthorized camping.

With luck, we will have heard the last of this for now. But a year from now, it will probably come up again. (hh)