Council gets a gift: Ideas for ‘Strong Towns’ – Hasso Hering

Council gets a gift: Ideas for ‘Strong Towns’ 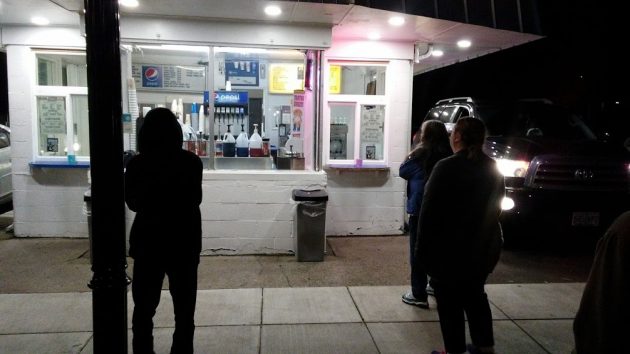 On Feb. 10, customers wait at Hasty Freez, the kind of place that makes a strong town.

What makes communities successful and strong, and what makes them less so year by year? There’s a new book out on that subject, and the Albany City Council now has copies thanks to former Councilman Ray Kopczynski.

The title is “Strong Towns, a Bottom-Up Revolution to Rebuild American Prosperity,” by Charles L. Marohn Jr.  The author, an engineer and former city planner, has built an online community on the “Strong Towns” theme, which holds that American cities have developed the wrong way since the Second World War, and this is the reason most don’t have nearly enough money for what they want to do.

I’ve read some of the “Strong Towns” material. One theme is that cities have built a lot of things — like many miles of streets in new developments — without any thought of where the money comes from to maintain them in the decades to come. That’s the case in Albany, which constantly pleads it has no money to repair residential streets, and makes that point again in the City Bridges newsletter that just came out.

Another theme is that older, established neighborhoods are a better financial bet for cities than fancy new ones on the outskirts.

How to rebuild and improve those old neighborhoods? Chapter 8 of the book has one simple-sounding approach of four steps: 1. Identify where people in the neighborhood struggle going about their daily routine. 2. Identify the next smallest thing that can be done today to address that struggle. 3. Do that thing. Do it right away. 4. Repeat the process.

The author explains: “Identifying where people struggle requires a humble form of public engagement. Those making these investment decisions need to literally walk in the footsteps of the people they are serving, to be present as they experience the city. Consider it product testing: to observe how people are using that which has been built.”

What’s he talking about? Maybe a sidewalk where there isn’t one. Maybe a way to avoid a dirty alley when walking to school. How about a street light on a scary corner? Talk to the people on that street and see what they see.

No studies are needed. No consultants. No elaborate reports. And often, no great expense. Some rules may have to be broken, or at least temporarily ignored. But the lives of people living in the neighborhood are made just a bit better. Then, as the man says, do it again.

“Strong Towns” came to mind the other night as I was getting something to eat at Hasty Freez downtown. Albany avoided a big mistake and made the right decision when it sited the new downtown fire station so that this business could stay where it had been for many, many years. It’s not fancy, but it serves people in the neighborhood (along with many others), is locally owned, and makes great burgers and shakes. Without it, that part of town would not be the same. It would be poorer.

There is more to the “Strong Towns” thinking. Having followed Marohn and his associates via email for some time, I know that reading their stuff is time well spent. If council members crack open the books they got from Kopczynski on Wednesday night, they likely will thank their former colleague for the ideas the gift contains. (hh) 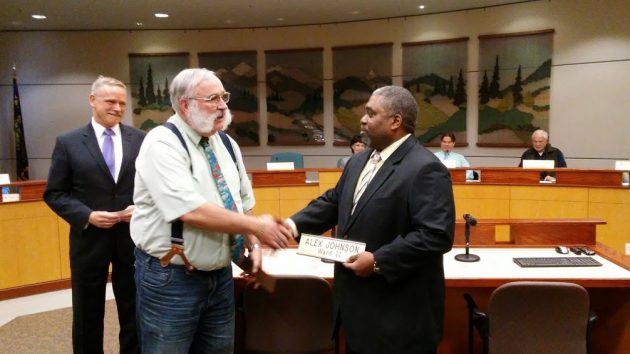 Ray Kopczynski (in shirtsleeves) as he was leaving the council in January 2019, with his successor, Alex Johnson II.

16 responses to “Council gets a gift: Ideas for ‘Strong Towns’”