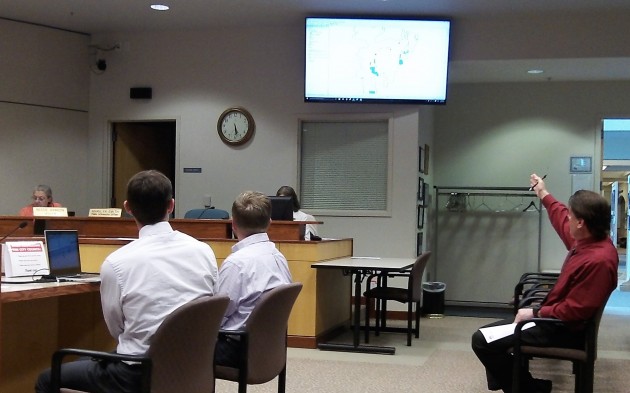 Don’t count on being able to buy recreational marijuana at many places in Albany if it becomes legal in the city at all. Maps prepared for the city council suggest there may be few if any locations where sales would be allowed.

The council is trying to be ready with regulations on the “time, manner and place” of cannabis commerce in case Albany voters in the November election overturn the council-passed ban on this business. The council dealt with the subject at Monday’s work session but didn’t make much progress.

Existing medical marijuana dispensaries — there seem to be four of them now — are not affected by any potential new city rules unless they seek to become sellers of recreational cannabis.

As a first step, councilors had asked for and the staff prepared maps illustrating where marijuana commerce might be allowed depending on what the council adopts as to limits on place. But the council hasn’t said what those limits might be.

One map (below) showed all parts of town zoned for retail sales of any kind. If Albany drops its existing ban and adopts no regulations, that’s where cannabis stores could go if they could find space to buy or lease.

Two other maps showed much, much less territory available to marijuana retailers if the rules already limiting medical dispensaries are applied or made a little more restrictive in terms of distance from residential areas, as some on the council want to do.

City Attorney Jim Delapoer cautioned the council against talking too much about where on the maps cannabis stores might be allowed. Someone could challenge the outcome on the grounds that the city was imposing new land-use restrictions, which can’t be done without a lot of procedural steps. Nevertheless, councilors asked to get digital copies of the maps so they can take a closer look.

Staff members repeated that the council has many choices in what it wants to regulate when it comes to recreational marijuana if the voters overturn the existing city ban. Among the possibilities are operating hours, proximity to each other or other uses or zones, proximity to certain streets, only in permanent buildings, not allowed as a home occupation, no security bars on windows, no outdoor storage, and regulations on odor or light or noise. And that’s just for retail. Local regulations regarding time, place and manner also can be imposed on other aspects of marijuana businesses, such as wholesale and processing.

At least two council members, Ray Kopczynski and Dick Olsen, are leaning against city regulation of recreational marijuana beyond what the state already regulates. But the other four councilors and the mayor have previously favored additional rules, especially in regard to place.

None of it will matter if voters uphold the council’s ban on recreational cannabis commerce on Nov. 8. (hh) 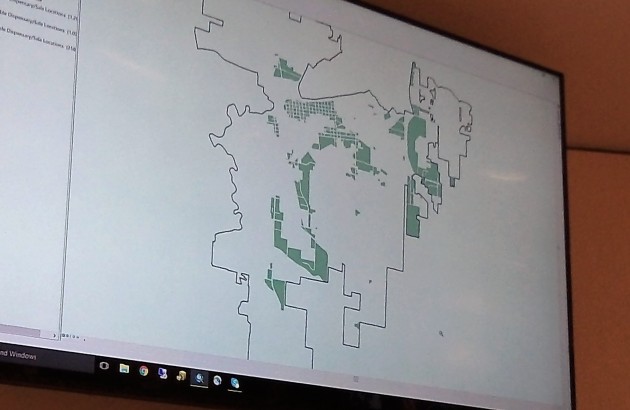 Parts of Albany zoned for retail generally are highlighted in green.