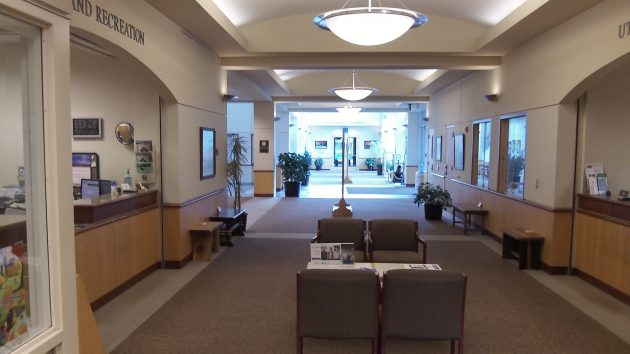 The city council chamber is at the end of this long lobby in Albany’s City Hall.

Albany Councilman Floyd Collins will retire from office when he completes his second four-year term at the end of the year, and four candidates have filed to become his successor in Ward I.

Filing for city offices in the Nov. 8 general election closed on Aug. 22. I’m always a little surprised when people volunteer for civic duties that earn no great rewards but require sitting through countless meetings, only to be savaged on social media for votes they cast, often by people who don’t know the background of why the decisions were made. So it’s encouraging to be able to report there’s no shortage of Albany council candidates this time around, especially for the one open seat without an incumbent.

Here are the candidates in Ward I, which covers north and west Albany: Terence Virnig, a professional engineer who works at Georgia Pacific Chemical and serves on the city’s bicycle and pedestrian commission; Mike Sykes, the owner of the heating and air conditioning company that bears his name; Michael Thomson, who lists no current employment but serves on the city budget committee; and Zachary Gilliland, who works in sales and customer support at Oregon Freeze Dry Foods.

In Ward II, Councilman Bill Coburn, who retired this year after 43 years in the electrical contracting business, is running for re-election to what would be his third term. He has drawn two challengers: Rebecca Winters, a family-law and bankruptcy attorney; and Sean Bates, a pharmacy technician at Walgreens. Ward II covers the south-central part of town.

Mayor Sharon Konopa has been on the council since 1997 and in the mayor’s office since 2009. She’s running for another two-year term. And as he has done in the last few elections, Charley Smith, the manager of the Valley Mobile Home Park, filed for the office as well,  giving it another try.

The mayor, of course, is elected citywide. But council members are elected only by voters in their respective wards. For a map, see http://infohub.cityofalbany.net/publicdata/PrintableMaps/wards.pdf.

The city pays councilors $130 a month plus $50 for Internet access, and the mayor gets $185 plus $50. So you can be pretty sure that whatever the reason is that they’re running, it’s not for the money. (hh)