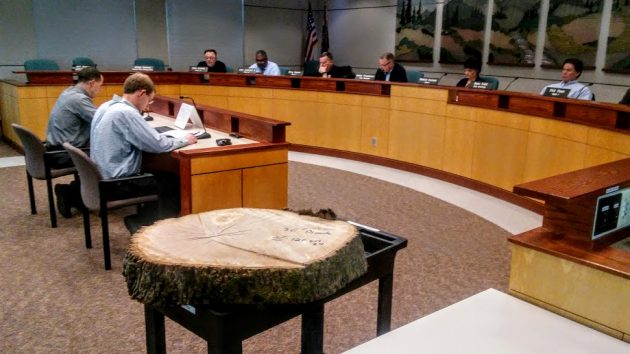 Jeff Blaine and Rick Barnett talk to the council with a visual aid, a slab of what used to be a 120-year old Oregon white oak.

The Albany City Council this week gave a cool reception to a proposal to try to preserve big old Oregon white oaks by charging a fee if property owners insist on cutting them down.

The city staff and Tree Commission suggested the fee, without specifying an amount, as part of a general revision of the city’s development and municipal codes. The idea is to encourage the preservation — and discourage the removal — of the remnants of groves of Oregon white oaks that started growing more than a century ago.

Community Development Director Jeff Blaine and Rick Barnett of the parks department, also the city forester, presented the idea of an “Oregon white oak removal fee” at the council’s work session Monday. The fee would be required for the removal of Oregon white oaks bigger than 6.5 feet in circumference.

But the council didn’t like it. Several members questioned the idea, and only Mayor Sharon Konopa spoke up in favor of protecting Albany’s historic trees.

Councilor Rich Kellum said it’s a question of “whose tree it is.” Charging a fee would cost owners more money, in addition to other fees and property taxes, to do what they want to improve their property. Councilor Alex Johnson spoke in a similar vein.

The council agreed to take up the other code changes later — they are mostly a matter of clearing up language — but without the part about trying to do more to protect ancient oaks. As for the trees, the council may hold another work session to hear from tree preservation advocates as well as someone representing property rights.

For 20 years Albany has had regulations requiring permits to remove trees above a certain size. As the mayor recalled, that helped preserve a big oak where the Goodwill store was built on Pacific Boulevard. But it didn’t save the grove that made room for Lowe’s parking lot off Oak Street. And last year, while two or three were saved, several other big white oaks were cut down for the North Albany subdivision called Pheasant Run. (hh)

The story was edited to make clear the proposed fee would apply to the removal of white oaks bigger than 6½ feet in circumference.


8 responses to “Council cool to idea for saving old oaks”