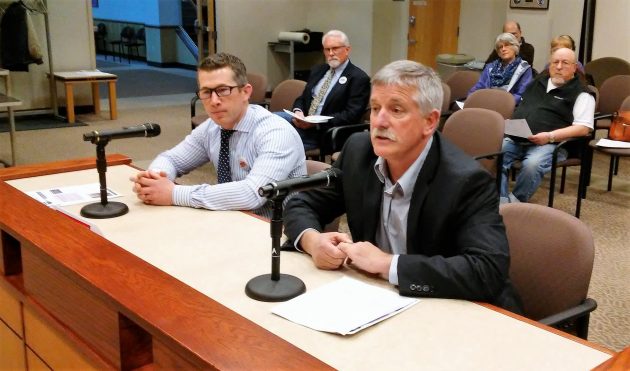 No one argued about the issue or the amount of money involved Wednesday before the Albany City Council quickly and unanimously endorsed the school board’s request for a $159 million bond issue that’s on the ballot in May.

Superintendent Jim Golden and Micah Smith, board chairman for the Greater Albany Public Schools, appeared before the council and asked the council to support the bond request. Proceeds of the bond sale would pay to make facility upgrades, provide space for vocational and technical education in the middle and high schools, build a new elementary school in northeast Albany, expand Oak Grove Elementary in North Albany, and start to rebuild West Albany High, providing for an auditorium, among other things. (The school district has published a complete list of projects here.)

GAPS estimates that the bonds would require a property tax rate of $2.35 per thousand dollars of assessed value over 20 years. The payments would start when an existing bond issue expires. So instead of dropping when the old bonds are paid off, the school-related tax rate would rise by 64 cents a thousand.

Among the points made by Smith and Golden as they appeared before the council: It’s been almost 10 years since Albany built the last new school (Timber Ridge in 2008); enrollment is expected to keep climbing because Albany is a less expensive place to live than Salem and certainly Corvallis; and much more needs to be done in the vocational and technical studies to prepare students for work.

If the bond passes and accomplishes al the planned improvements, don’t expect it to be the last one. Golden said it would take another bond issue to finish rebuilding West High, which dates from 1953. Eventually the new school’s front entrance will be from Liberty Street instead of Queen Avenue.

Councilman Dick Olsen, a champion of Central Elementary School who prevented the school district from closing the building in 1979, worried that GAPS might stop using the structure, which dates from 1915. Golden responded that the district would need all its “assets” to hold the expected influx of students.

The school bond comes at a time when the city of Albany is also looking for more money. The council has just enacted a new storm water utility fee and is talking about ways to raise more money for streets, with a gas tax or by some other means. The council also heard Wednesday that it will soon get a report on the unmet needs of the wastewater system. On the state level, the legislature is working on a gas tax hike as well, a boost likely to be bigger than the 3 cents a gallon the city is talking about. All of it is a reflection at least in part of the fact that all our public infrastructure — from streets and bridges to sewer pipes and schools — are up to a century old and no one has been collecting enough money to replace them when they wear out. And the costs are staggering. Golden told the council that building a new high school now costs $100 million.

None of that entered the council discussion Wednesday. Smith, who in the May 16 election is running for re-election against two challengers, asked for the council’s endorsement of the bond. Councilman Bill Coburn moved that the council give its support, and all six members voted aye. (hh)