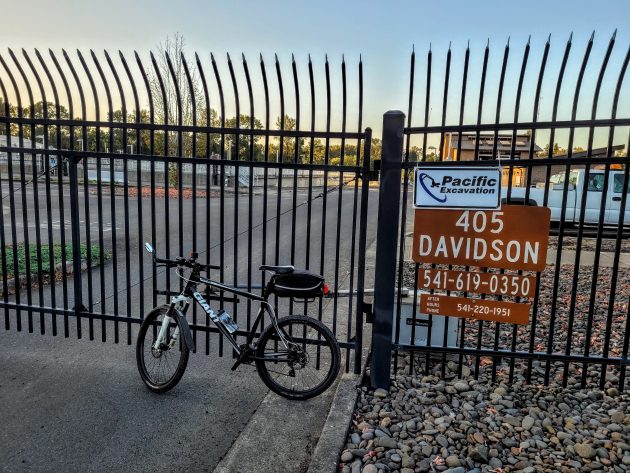 At the gate of the Albany-Millersburg sewage treatment plant, where Pacific Excavation is working on a $6.9 million contract to build facilities to handle “biosolids.”

The Albany City Council Monday voted quickly and unanimously to approve a settlement of a lawsuit the city filed four years ago over the failure of a system at the city’s new sewage treatment plant.

The council acted after being briefed in an executive session closed to the public.

In 2017, Albany sued the engineering firm CH2M-Hill over the failure of the so-called “Cannibal” solids-handling system at the sewer plant completed in 2009, and over alleged defects in the design of the Talking Water Gardens, a system of ponds completed in 2012 to cool treated wastewater before it is discharged to the Willamette River. Damage claims asserted by the city initially totaled more than $80 million.

The settlement that’s the subject of the council’s approval deals only with the Cannibal issue. Talking Water Gardens is to be dealt with later as a separate issue.

Details of the settlement are still confidential. They will become public when the legal agreement is signed by both parties, because the agreement is subject to disclosure under Oregon’s public-records law.

Proceeds from the settlement will go toward tackling the problem with solids produced by the treatment of sewage. Because Cannibal failed to turn the stuff into material that can be sold and applied to farm land, as it was advertised to do, the city has had to spend hundreds of thousands of dollars per year to haul the smelly sludge to the Coffin Butte landfill.

In 2012, the city won a $4.7 million settlement against Siemens, the company that marketed the Cannibal system. Since then Albany engineers and consultants have settled on composting as a way to deal with the sludge.

This April, the council awarded a contract to Pacific Excavation to construct a composting facility at the plant, along with upgrading its dewatering system, to handle at least part of the solids. The contract is for just under $6.9 million.

Under the Oregon public-meetings law, reporters are allowed to sit in on most executive sessions. But if they do, they are obliged to abide by instructions of the governing body not to report any of the details of the discussion.

We have a choice. We can attend and have our lips sealed. Or we can stay away and try to worm the information out some other way. In this case, I watched the closed part of the council’s Zoom meeting. I figure nothing is lost by waiting to report the settlement terms until the legal agreement is signed and filed and that part of the lawsuit is dismissed. This may take a few weeks.

In the meantime, let’s just say this: Albany ratepayers will have reason to like the outcome, because it will relieve the upward pressure on sewer rates. (hh)