Could Madison become a ‘bike boulevard’? 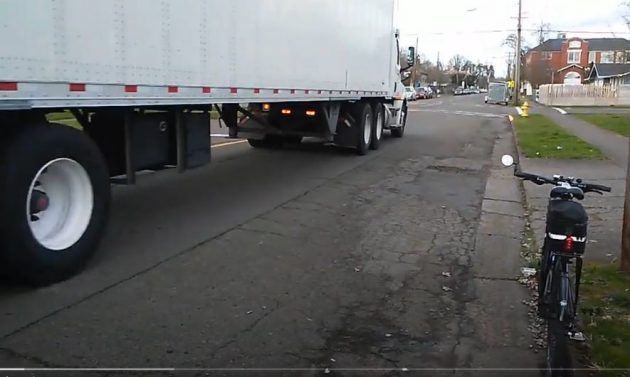 Every once in a while I find myself on Madison, one of the streets in old Albany where the pavement makes your teeth chatter, especially if you’re on a bike. So an item on the agenda of the city’s bike and pedestrian commission caught my eye.

“Madison Street Bicycle Boulevard Discussion” is on the advisory commission’s plate for its virtual meeting at 7 p.m. Tuesday, Feb. 23.

In connection with bikes, the street last appeared in this blog in October 2019. That’s when the bike/ped commission heard about the possibility of painting parts of the intersections green as a way to alert drivers to the potential presence of cyclists.

No green paint has yet appeared.

Madison is one of the few streets connecting Pacific Boulevard to Albany’s Willamette riverfront and the First/Second Avenue couplet. It gets quite a bit of traffic including cyclists. Because of a history of bike-car crashes along Madison, Albany is in line for a small ODOT grant for a safety project.

“As currently envisioned,” the city’s Ron Irish told me, “the project would involve sharrows, some striping improvements at intersections to better define the bike route of travel, and speed humps to help keep vehicle speeds down.”

Albany’s Transportation Systems Plan designates this part of Madison as a possible “bike boulevard,” but just what changes that would involve has not been defined.

This doesn’t sound feasible for Madison, but we’ll see.

What the bike/ped commission is expected to discuss on Tuesday is whether to expand the ODOT safety project to include bike boulevard improvements as well. If that ends up the plan, it would need city council approval.

What about the rough pavement? There’s no funding for doing anything drastic like an overlay, which would also require expensive work to make the curbs at all the intersections comply with the Americans with Disabilities Act..

“We’re looking to see,” Irish told me, “if there isn’t perhaps a surface maintenance treatment we could use that would improve the ride surface without triggering ADA improvements.”

Good luck with that. In the meantime, if you ride a bike on Madison, don’t try it with one hand holding a camera phone. Like this: (hh)

15 responses to “Could Madison become a ‘bike boulevard’?”