Could former fuel depot find a new use? 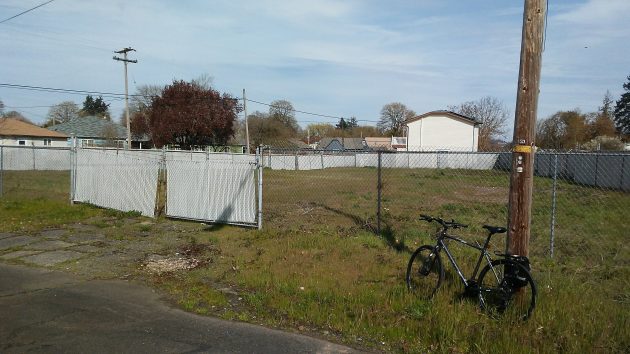 The vacant parcel at First and Burkhart on March 31.

My bike rides around Albany often take me past the southeast corner of First Avenue and Burkhart Street, where there used to be an oil company tank farm. Now and then I wonder if the property will ever again have some kind of use.

The fuel tanks are long gone. So are the sheds that used to be there. All that’s there’s is a fence around the place.

Five years later, in 2012, the structures were demolished and the county assessor valued the site as vacant land only. The annual property taxes on the property plummeted from $3,391 in 2011 to a mere $344 the following year. The assessor now values the lot at only $25,620 on the market and $21,290 for tax purposes, and the tax bill for 2018 was $404. Considering its history in the fuel industry, the soil there may be contaminated from spills, which would explain the low valuation.

Despite its former industrial use, the city of Albany has long zoned the land single-family residential (RS 6.5). The lot measures 12,750 square feet or about one-third of an acre, so presumably there would be space enough for at least a couple of houses, maybe more.

The lot borders the Union Pacific and Portland & Western rail lines, but proximity to the railroad has not kept other Albany sites from being redeveloped. Some vacant lots in the older parts of Albany have lately seen in-fill construction of much-needed houses, and maybe some day this lot will once again be useful too. (hh)

2 responses to “Could former fuel depot find a new use?”