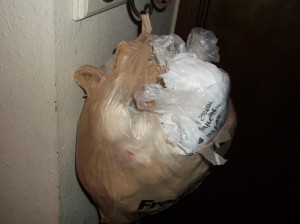 Some people may have saved up lots of plastic bags of the type Corvallis is about to ban.

As of the first of the year, Corvallis is joining the cities that don’t trust their residents to use their best judgment when shopping. A few months ago, the city council voted to ban plastic shopping bags. Now the first part of the ban is taking effect at stores with more than 50 employees. Smaller stores are affected in six months. (Just what the size of a store has to do with the bag ban was never clear, and it still is not.)

The main thing is that in Corvallis, the city government wants to punish people who don’t plan ahead and bring a shopping bag when they go to the store. From now on, if shoppers need a bag, they’ll have to buy one of paper, and pay at least a nickel per bag. The whole thing may strike you, as it does me, as an exercise in bossing people around for no reason other than that’s what the bosses think they can do.

Some Corvallis residents want to repeal the ban. We’ll see how that goes. Meanwhile, people who normally shop in Corvallis have choices. They can submit and go along with this authoritarian scheme.Or they can mount a little passive resistance in the cause of consumer freedom and choice. They might, for instance, have a pretty good supply of plastic bags at home, having saved them up in anticipation of the ban. Wadded up, these plastic sacks take up hardly any space at all. So you could always have two or three in your coat pocket, and at the check-out you could whip them out and ask the checker to put your stuff in there. It will slow things down, sure, but whose fault is that? If the people in line behind you complain, tell them to complain to city hall.

And if you don’t want to create a scene by staging that or some other stunt, you have another choice. As you commute around the valley, you can buy whatever you need somewhere else. (hh)

From Monique Lloyd: I don’t live in Corvallis, but I work there and often do my shopping before or after work.  I have a nice big supply of plastic bags which I will use. When I run out I’ll just have the checker place my items in my cart and then load them in plastic containers in my car. I refuse to pay for paper bags and I don’t think fabric ones are sanitary.  Why don’t grocery stores do what Costco does and put items in boxes? Thanks for your column.– Monique Lloyd, Halsey.

From Lisa: By all means let’s suggest to people to slow things up in line to make a statement. WHAT!!! Have you forgotten about the people who work there? That is not fair to the employees to slow things up to send a message. Who will get the message? The poor employees who have to now deal with bags that do not stand up to bag. Bags that smell like cat urine and cat/dog hair and cigarette smoke. By all means let’s make things worse for them, Mr. Hering. It is not like they do not get to hear how angry everyone is about the ban, as if the employees at the stores have created this just to make a nickel. If you want to make a statement, then go down and hold up a sign or talk to the councill. Leave the innocent people alone and stop directing the sheep of society to direct their anger at the wrong people.