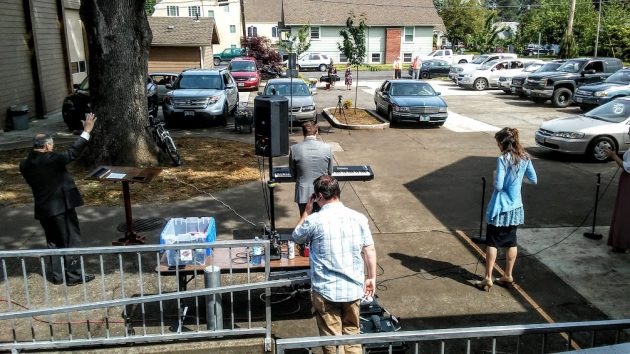 Congregations around the country have found ways to worship together despite the coronavirus restrictions on group meetings, and the Apostolic Life Center in Albany has done the same.

On Sunday I paid a visit to the the corner of Second Avenue and Pine, not far from one of my regular bike routes, where members of the church attended their Mother’s Day service while sitting in about two dozen cars in the parking lot and along the curb.

With windows open in Sunday’s fine weather, the parishioners could listen to their Pastor Dennis Johnson and others, including musicians, through a sound system. Or they could follow the service on their car radios via a low-power FM transmitter whose signal, I was told, carries only about one block.

I understand that following a previous parking lot service, the church was informed that somebody made a complaint to the Albany police and an officer would check this Sunday. That’s what prompted me to pay a visit. But in the event, church board member Dennis Mode told me, an officer had stopped by only to make sure traffic wasn’t being blocked.

Orange-vested church members directed parishioners to parking spots. With people in their cars, and the musicians and other participants in the service remaining far apart, “social distancing” was being scrupulously observed, as far as I could see.

Little more than half an hour after it began, the service concluded and the parking lot started emptying out. (hh)

A couple of new mothers came forward with their babies to receive gifts during the Mother’s Day service.